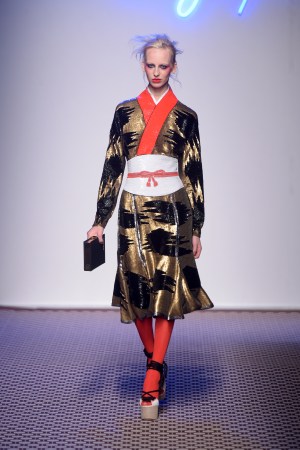 Olympia Le Tan had the idea of doing a Japan-themed collection for quite some time, but only when her beloved Hotel Okura, a Tokyo landmark since 1962, closed for demolition earlier this year, she made it a reality.

Viewing the circumstances, which she said left her “devastated,” her spring effort was less over-the-top and flamboyant than usual. With remarkable attention to detail, the designer let her prints and fabrics do the talking.

The hotel’s elevator doors reemerged from the ashes on a sequined trompe l’oeil kimono, while the graphic pattern of the carpets adorned short-sleeve retro shirts with pointy collars and high-waisted, faux-jacquard skirts. And don’t forget the Okura pj’s: “I had once lost mine, so they lent me some of theirs. I captured them here, except they are beaded and in silk-satin — not in polyester,” the designer said.

It was a spirited show thanks to Le Tan’s whimsical and inventive vocabulary.