Roland Mouret marked the 10th anniversary of his Galaxy dress with a limited-edition capsule collection as well as tailored looks with Seventies-tinged motifs. 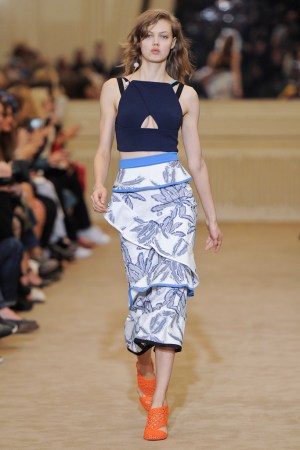 Roland Mouret marked the 10th anniversary of his signature Galaxy dress with a limited-edition capsule collection of seven pieces inspired by the tailored hourglass silhouette, including a jacket and a jumpsuit with the same angular neckline. The capsule went on sale online after the designer’s spring show in Paris, which ended with models wearing Galaxy dresses in nine colors, including navy, mustard, coral pink and mint green. The collection will also be available through select retailers, including Bergdorf Goodman, Neiman Marcus, Printemps, Selfridges and Tsum.

Mouret has previously said he doesn’t want to be defined by the Galaxy, which has been worn by celebrities such as Scarlett Johansson and Cameron Diaz. But he is also mindful of commercial considerations. “It’s the dress that allowed me to enter the fashion bible, and for that alone, I have to be respectful of that dress and respectful of the woman who wears it,” he said backstage.

The anniversary had him thinking back to when he was 10 years old and first became aware of fashion through a French TV program called “Aujourd’hui Madame.” Those memories inspired precisely tailored outfits in Seventies-tinged floral or leaf motifs, many featuring folded or cutout necklines. He also worked graphic contrasts, such as a black raw-edged halter top paired with a stucco-textured white skirt and woven orange sandals. The hyper-feminine creations should ensure that Mouret will not be remembered as a one-hit wonder.