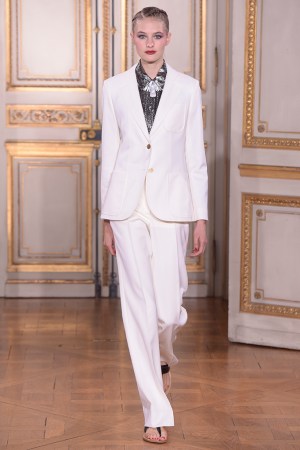 Magazines and bloggers go on about it. Books have been written about it. And now Vanessa Seward has paid homage to French women and their “je ne sais quoi” with her terrific spring collection, even exalting them via voiceover on her show soundtrack. “You’re glamorous but comfortable,” she murmured, echoing what she had said backstage.

The designer may forever be in thrall of Seventies-era Yves Saint Laurent. Here was a saharienne done up as a cape-sleeved top; there, a brass-buttoned peacoat made trim and elongated, and peasant dresses with Moroccan airs in gleaming metallic brocades.

While the clothes might not have been extremely original, they oozed that effortless Parisian chic that Seward herself exemplifies. For example, she sparked a waist-cinched trenchcoat with a gold Lurex sweater, and made a boxy cotton shirtdress mouthwatering in a vivid shade of Bordeaux.

No surprise that Seward, who just opened her first boutique on the Rue d’Alger in Paris, spends a lot of time with customers, having devoted a whole day on Sept. 25. “We did a record that day,” she smiled. “Actually, it was the best thing to un-stress before the show. It brings you back to reality.”