Ole Yde looked to “exotic and unknown lands” for inspiration — and translated that into animal prints and ostrich feathers accented by tulle. 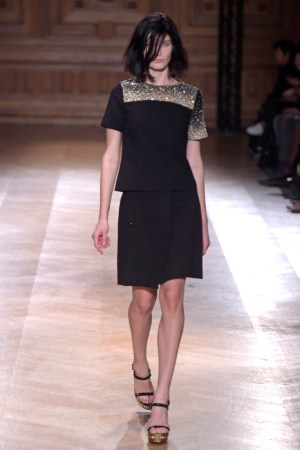 Ole Yde said in the show notes for his spring collection that he looked to “exotic and unknown lands,” which he translated via animal prints on a sassy tie-neck dress, an airy evening number and other looks in a palette that included electric blue, brown, cream and orange.

Yde also affixed ostrich feathers to otherwise minimalist evening gowns and showed a series of tulle tops with 16th-century ruff collars, which popped from underneath both a tweed jacket-and-skirt ensemble and a crystal-embroidered black overcoat. Though some pieces had commercial appeal, the collection as a whole suggested that Yde shouldn’t try to be all things to all people.