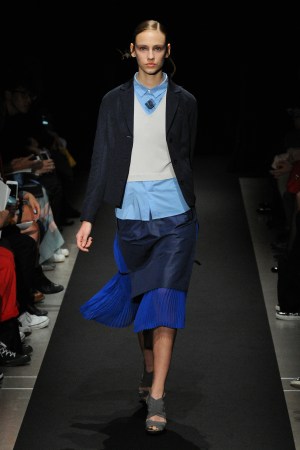 Ace Creation may be a new brand, but its designers are hardly inexperienced. Chief designer Naoshi Sawayanagi previously had an eponymous line, which he showed during Tokyo Fashion Week between 2009 and 2012, and creative director Taisuke Kohji is a past recipient of a Japan Fashion Week new designer award.

Sawayanagi and Kohji’s inaugural collection together consisted of simple, almost basic shapes that were elevated by high-tech materials, rich textures and unique production methods. And as if to reinforce the concept, the models were preceded by Pepper — a robot made by Japan’s SoftBank — who gave a spoken welcome to guests.

The designers endeavored to combine craftsmanship with cutting-edge technology. Accessories, for example, were made with a 3-D printer and traditional Japanese indigo dye. They also borrowed elements from outdoor wear, such as welded seams and rubber guarded zippers on blazers and jackets, rendering them waterproof. A few knit dresses with what looked like chiffon overlays moved beautifully on the models, but turned out to be even more impressive as they were made as one continuous piece.

Pencil skirts, jackets, lace-front trousers and an open-sleeve dress — in a mix of navy or red, white jacquards or fine brocades — put the beautiful textiles center stage. Unfortunately, a gray and white pantsuit made of strips of lace layered over one another took the concept too far, to the point where the texture became a distraction.