Steven Hall and Yurika Ohara took a journey to Africa for spring 2016, offering printed shifts and patterned knits with a retro-tinged vibe. 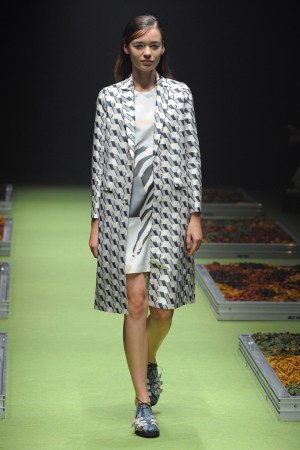 Yurika Ohara and Steven Hall took their audience on a journey to Africa this season, although they said they aimed to do it in a “playful, dreamlike way.” Their runway was covered in light green carpet and decorated with rectangles of carefully arranged woodchips in shades of brown, rust and ochre for an effect that was somewhere between desert and grassland.

The designers showed shift dresses and blouson tops in a silky fabric printed somewhat abstractly with zebras, antelopes, flowers, enlarged cheetah spots and other takes on African flora and fauna. Jacquards also played a significant role, with a zigzag pattern showing up in both white and green with black. Certain pieces, such as a printed miniskirt with cargo pockets, felt relatively modern and yet the overall vibe of the lineup was retro — but not in a chic or cool way. The knotted scarves and long patterned-knit cardigans seemed almost old-fashioned and the softly constructed midi skirts and coats at times bordered on frumpy.