Johan Ku was inspired by the elements of “pure platonic romance and cruel death” in the film adaptation of "Death in Venice." 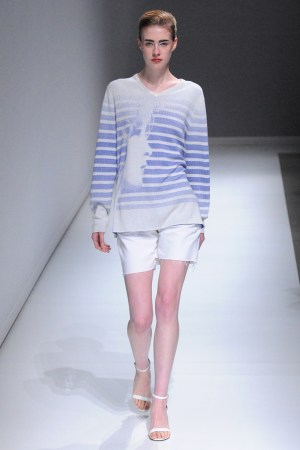 Luchino Visconti’s cinematic interpretation of Thomas Mann’s novel “Death in Venice” was on Johan Ku’s mind this season. Specifically, the designer referenced “the ending moment when Tadzio is standing in front of a splendid sea reflection.”

Ku said he aimed to combine elements of “pure platonic romance and cruel death,” presumably tapping into the film’s storyline of a composer who becomes obsessed with a young Polish boy amid a cholera outbreak in Venice. His-and-hers sweaters emblazoned with the face of Tadzio, the boy in the film, were the most literal interpretations of the theme. But some of the other clothes had a romantic look and could handily serve as the components of a travel wardrobe for a trip to the Italian city.

Standouts included a series of white pieces covered with bits of embroidered fabric — sometimes incorporating sequins — giving them a fuzzy texture; Ku used this construction on a jacket, a peplum top and minidress with an angular hemline. The show then took a darker turn with a lengthy sequence of all-back looks, which included long, evening-appropriate dresses and more playful fare such as floaty pants with slits down the front that revealed the knees.