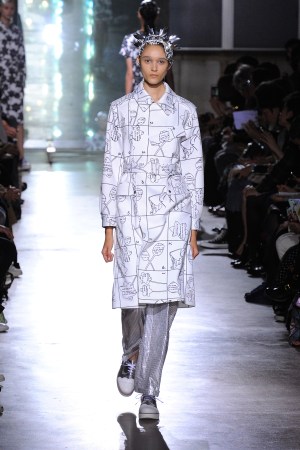 Gardens are hardly an original source of inspiration, but Nao Yagi and Hokuto Katsui managed to make the concept feel fresh and whimsical for spring. The show opened with a series of casual dresses and separates in a cartoonlike floral pattern. This print was first shown in black and white, and then in a silver version that lent a modern, almost Space Age feel to the clothes.

Silhouettes were slightly less flowy and oversize than some of Mint Designs’ previous collections, yet were still easy and unrestrictive. Dresses and skirts featured sheer pleated panels attached at the waist, and asymmetric details became more prominent with movement.

But the textiles were what really stood out in this show. A silver checked jacquard with brightly colored, outsize tulips woven into it was particularly eye-catching, whether it was used all over in a modern shift dress or peeking out from between pleats or under half-undone zippers. Another thick jacquard looked soft and wearable in boxy short-sleeve tops, an A-line skirt with diagonal zippers and even a little girl’s coat.