Inspired by the work of architect Frank Gehry, Yasutoshi Ezumi took a deconstructed approach to his spring collection. 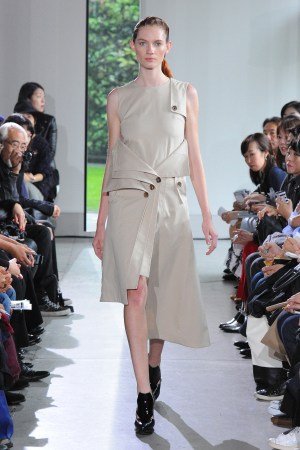 Frank Gehry is having a Tokyo moment. The renowned architect happens to be in the city to inaugurate two exhibitions dedicated to his work, including one on his recent Paris project for the Fondation Louis Vuitton. Fortuitously, Yasutoshi Ezumi happened to look to Gehry for inspiration for spring, even incorporating a recording of the architect speaking about his creative process as part of his runway show soundtrack.

“[Gehry] stripped off some of the components of the buildings, and then reconstructed them,” Ezumi said. “After stripping off portions of the present composition, I want people to see the newly reconstructed parts.”

The designer, who staged his show in an art gallery, succeeded in giving his clothes a deconstructed vibe. He opened with a dress that looked as if it had been assembled from pieces of a trenchcoat and used an array of men’s suit and shirt fabrics, which he worked into intriguing items such as a long coat made of panels of different textiles, including a pinstripe. Also fresh-looking: several dresses featuring belts that resembled tied jacket sleeves and a cute series done in a perforated fabric, including a cap-sleeve top-and-skirt combo.