Tokyo Fashion Week wrapped up with something a bit unusual: a runway show featuring kimonos designed by a rock star. 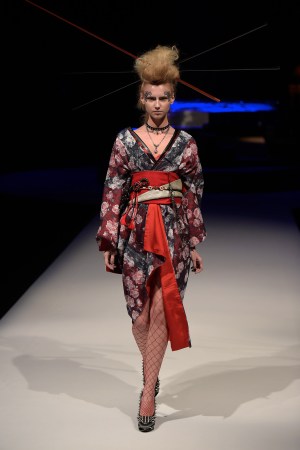 Tokyo Fashion Week decided to wrap up the spring 2016 action with something a bit unusual: a runway show featuring kimonos designed by a rock star. Fans — many of them screaming his name — packed the audience to see Yoshiki, a member of the heavy metal band X Japan.

At the height of his music career in the Nineties, Yoshiki was known for his elaborate stage costumes and makeup. His current look is somewhat more toned down, but his love for theatrics was still apparent in his runway show. After emerging wearing an open kimono over black leather pants and a mesh top, Yoshiki revealed his face from behind a mask and then walked over to a clear acrylic grand piano to perform. Other musicians on stringed instruments and a traditional Japanese taiko drum rounded out his ensemble.

For the most part, the kimonos themselves were fairly standard, decorated with floral or butterfly motifs. There were also some less conventional ones with geometric prints or leopard print trim. Unlike the thicker silk of traditional garments, Yoshikimono’s were made from a fine, slightly sheer fabric.

But where the kimonos most diverged from tradition was in their sultry styling. Worn off the shoulder and folded up to show plenty of leg, they were accessorized with lace lingerie, studded heels and chokers, knee-high boots, and some very dangerous-looking hair sticks. The show closed with the final model climbing atop Yoshiki’s piano as he played, and striking a seductive pose under a single spotlight.

A spokesman for the company that makes the kimonos said it will hold an exhibition later this month, with the hope of getting the new kimono collection picked up by stores for next year.