For her first presentation at London Collections: Men, the designer had models sew with wooden embroidery hoops and tapestry frames. 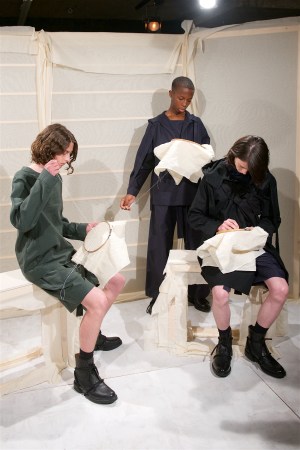 For her first presentation at London Collections: Men, Phoebe English returned to the waiting room, the notion behind her last women’s show. She kept models busy and had them sew on patterns with wooden embroidery hoops and tapestry frames.

“All of the men I know sew,” English said. “So they are doing something while they are waiting.”

As with her previous men’s ranges, the British designer was inspired by her boyfriend Sam and her male friends. “Sam wears a lot of stripes,” she noted. “I think it will continue to be a key thing in men’s wear.”

To wit: There were long shirt or shorts done in striped gray linen as well as crisp white shirts, some detailed with oversized pockets or drawstrings. Bomber jackets and parkas with parachute details rounded out her minimalist lineup of easy pieces in hues of blue, white and black.