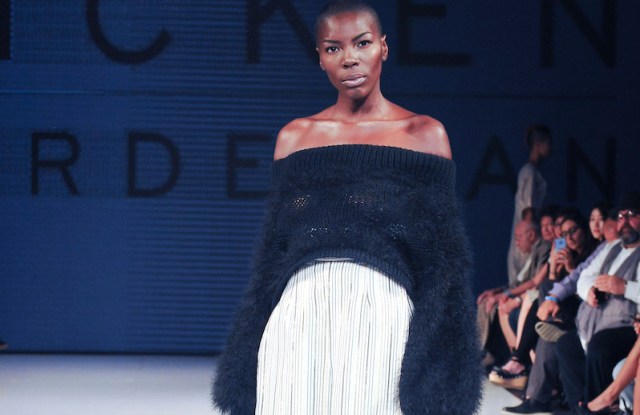 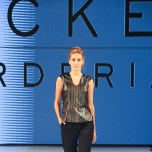 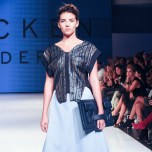 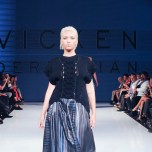 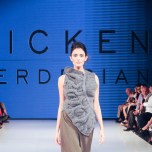 From training as an architect to working on runway looks at BCBG Max Azria to launching his namesake label, Vicken Derderian is always thinking about movement.

For the second collection of his year-old business, Derderian reconnected with Kyung Hwa Kim, a classmate from the fashion design program at Academy of Art University, who also had overlapped with him at BCBG Max Azria. The two embarked on what became a style sabbatical to Armenia, where they spent four weeks designing the spring line.

An expert in knits, Kim adeptly steered the line into the realm of structured but sensual sweater dressing. A strapless navy dress moved like an inky column as tufts of fringe fluttered over open seams, and a cropped ivory turtleneck sweater sprouted full sleeves knitted in a honeycomb pattern. A neutral palette of black, navy, gray and ivory allowed the knits to pair perfectly with the metallic stripes, floral jacquard and gold lamé fabric that formed the base for midi skirts, high-waisted palazzo pants, culottes and other breezy separates. Derderian continued experimenting by giving an extra swish to skirts, adding peaked poufs to the back of some of them.

That’s because “at the end of the day, for me, it’s a more intimate architecture of the body — the knits, softness, the textures,” said the Pasadena, Calif.-based designer. “And the movement,” Kim added.

The oversized clutches symbolized the complete opposite of their philosophy for clothing. As long as a woman’s arm and new to the line, the rectangular repositories were large enough to hold an iPad, wallet, portfolio and other items. They were also designed with a strap in which the wearer could slip in a hand and wield the accessory like a shield.

“We like the hard and the soft, the juxtaposition,” Derderian said.

Sometimes combining the unexpected came across as awkward. For instance, layering olive-green mesh onto a grayish blue floral skirt resulted in a mélange of athletic, military and ladylike trends that was hardly flattering. That was a rare misstep. Overall, the collection would be a refreshing addition to the wardrobe of a woman who leads a busy life but still wants to look polished with a creative flair.