Alberta Ferretti built a collection for tough women with a healthy sex drive. 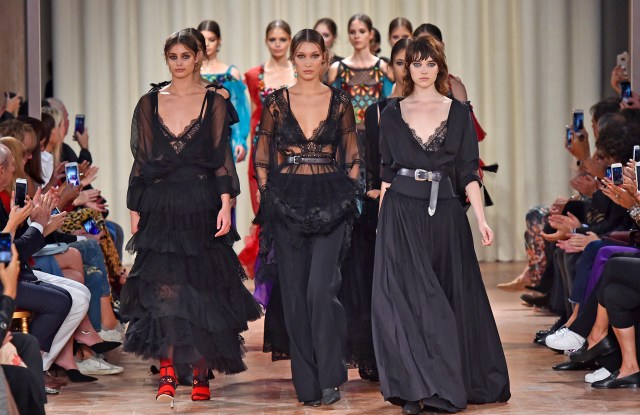 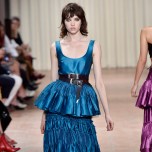 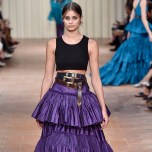 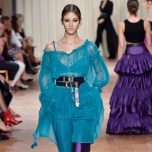 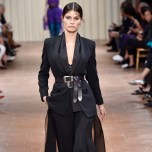 Of all things core to Alberta Ferretti’s brand — ethereal romance, goddess, dresses, the diaphanous, etc. — borrowing from the boys is not on the list. But she played against type to an extent for spring, using tailored men’s wear trousers, blazers and robust cowboy belts to underscore a side of femininity that typically goes unexplored by the house. Built for tough, independent women with a healthy sex drive, the lineup focused on strong colors, such as black, red, purple and teal worked on bordello baby dolls cascading over pants and cinched with Western belts piled and wrapped to create a corsetlike waist. It took a moment to adjust to the spice Ferretti was serving — particularly the brash palette and some floral embroidered frocks — but the lineup’s new bite perked things up.

Bella Hadid opened the show in a tooled leather bandeau top over a tiered purple silk shantung skirt for a dose of nouveau “Deadwood” via Western Victoriana. Ferretti mixed in Eastern boudoir with kimonos worn over bralettes and under blazers. There were corsetlike tops gently unlaced in the back, white dresses that resembled dressing gowns and a series of Western goth black poplins with long, thickly pleated skirts that closed the show on a striking note. One could argue that the lineup rambled all over the map, but the mix was intentional and coalesced into something new for Ferretti that reflected the times. “We’re living in a mixed culture and women tend to mix things up,” she said backstage. “I like the idea of mixing the masculine and the feminine in the way our cultures are mixed.”