The designer show his equestrian-themed collection in recently restored Austrian stables in Milan. 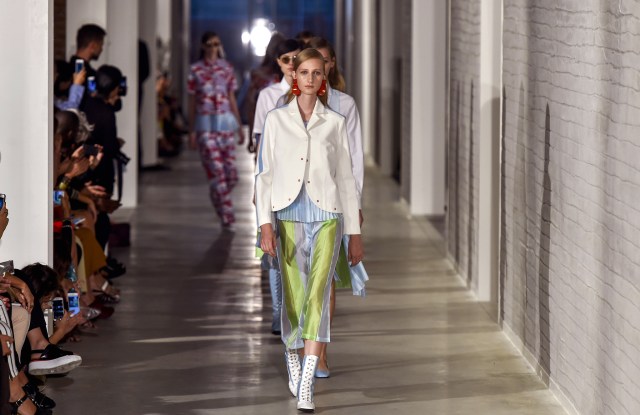 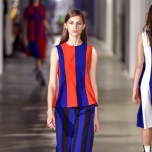 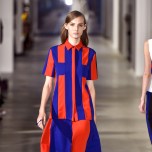 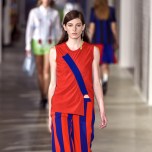 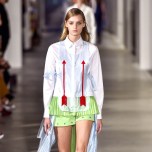 Arthur Arbesser showed his spring collection in old Austrian stables that were recently restored by architect Luca Cipelletti, a friend and frequent collaborator. The move was designed to highlight the lineup’s equestrian theme — but Ralph Lauren this wasn’t.

The designer tapped influences as wide-ranging as his Austrian ancestors and the colorful uniforms worn by riders in the Palio di Siena, the medieval horse race that opposes riders from the Italian city’s 17 districts. He paired boldly striped technical knits with lace-up patent leather booties, and oversized shirt dresses had horizontal panels of jockey silk spliced in.

“The idea was to make it all ironic and twisted and make it sort of funky,” Arbesser explained backstage. That playful touch was evident in the bold red Swarovski crystal arrows on the bodice of a fluttery pale blue slipdress — a pattern echoed throughout and in the oversized earrings designed by Ilenia Corti.

With its minimalist shapes, much of the collection’s appeal lay in the fabrics, which included camouflage-printed lace and an acid-green material with a holographic sheen. For the pièce de résistance, Arbesser teamed with Swarovski to coat a turf-green gingham shirt and shorts with heat-transferred crystal fabric.

A finalist of the 2015 edition of the LVMH Prize, Arbesser has been touted as one of the stars of Milan’s new guard. He described this collection, which also included sunglasses designed for Silhouette, as his most “concrete” so far.

“The whole look is much sharper and from head to toe, done,” he said. “This feels to me like the most precise and most personal collection. Every look I can totally say, ‘This is totally me,’ and I’m very happy about that.” There was no doubting his joy as he galloped out to take his bow.