The designer show a testament to his unique approach to fashion: away from industry trends, toward a strong, individual handwriting. 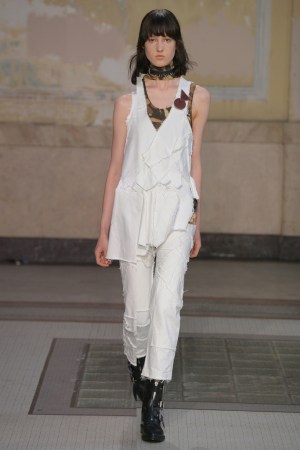 Following his brand’s relocation from Paris to Milan, where he could have a tighter grip on production, Damir Doma, for the first time, sent out an equal number of men’s and women’s looks, which were strongly riffing off each other and were essentially presented as couples.

Presented in an occupied space/arts center/former meat market, which never before allowed a commercial fashion show to take place on its premises, the collection had an air of soft rebellion. Doma took the slim and elongated silhouettes apart and put them back together again. Some were pierced with metal rings, best seen on sleeveless, mixed-media vests that had a unisex appeal, others — such as a ruffled column dress — were literally stitched together from ripped fabric.

Doma’s signature soft-shouldered tailoring made a stellar return via pajama-type overcoats, cinched around the ribs, producing a sensual body and a sense of order among the distressed, unruly fabrics, which he worked to great effect this season.

There was paper-thin silk on a transparent men’s shirt, patchworked and overdyed denim, bleach-printed viscose worn as “flags,” as Doma called them, over T-shirts and handmade knits that were artfully embroidered with ribbons and scraps of monochrome material.

“Never for money. Only for love,” was the collection’s title, inspired by the lyrics of a Talking Heads song, which aptly echoed Doma’s approach to fashion: away from industry trends, toward a strong, individual handwriting.

Rather than a separate women’s show come fall, re-sees and appointments are slated for September at his showroom in Milan.