In her breathtaking spring collection, Miuccia Prada de-blahed the classics with all the power of her potent Prada-ness. 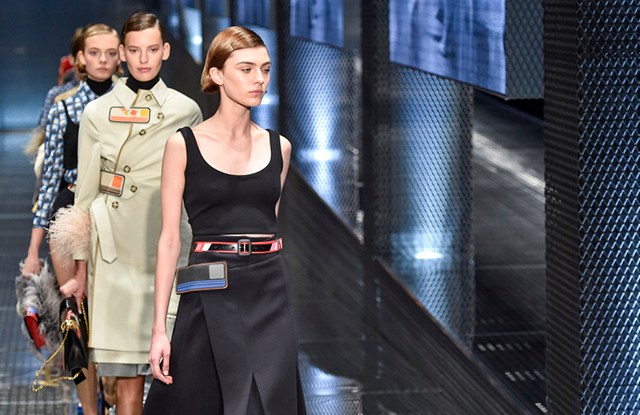 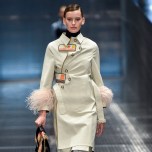 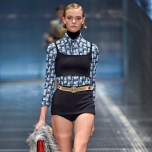 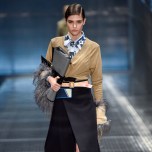 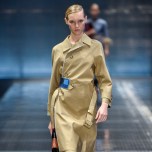 Miuccia Prada isn’t so shy after all. You know all those peek-a-boo show bows she’s famous for, the quick blink-and-you-missed-her half-steps from backstage? It turns out, they have nothing to do with reticence or stage fright. Rather, Prada just may not be into going out there to soak up the applause. At least not until after her spring show on Wednesday night, when she proceeded a good way down the runway (the same metal mesh catwalk she used for men’s). She stopped where director David O. Russell sat with Sinqua Walls, Kuoth Wiel and Jack Huston, the stars of Russell’s film collaboration with Prada, a snippet of which was screened during the show. Prada stopped and applauded them for several seconds before returning backstage.

A graceful gesture. And appropriate to the sartorial moment, because the graceful gesture is what Prada had on her mind for spring. “I decided I wanted to…do something much more simple [than the recent past collections], and kind of trying to find a new way of elegance,” she said backstage. “Elegance sounds [like] an old-fashioned word, but also [stands] for something meaningful, cultivated….We need at this moment something personal, intimate, real, more sensitive somehow.”

That quest culminated in a breathtaking collection, one in which she de-blahed the classics with all the power of her potent Prada-ness. Tank, trench, cardigan, plaid shirt, pajamas, baseball jacket, wrap skirt, and on and on, even the polite pinup two-piece swimsuit of yore: Prada rethought them in a manner that had nothing to do with styling over substance or staging shenanigans, movie aside. (In fact, at this double feature, you had to choose one, film or runway. Divided attention would have shortchanged both.) A major motif was the incongruous application of marabou feathers to much of the above, whether as cuffs on pajamas (tops and bottoms trimmed in different colors); a floating panel down the length of a skirt, or a boa dangling at the wrists of a shirt/sweater/skirt trio. Otherwise, Prada layered discordant pieces and prints and made subtle tweaks of silhouette, buttoning a trench off to the side and exaggerating a baseball jacket into a couture-like sac in back.

Personal and intimate, as per the designer’s stated ambition — definitely. But in this age of equality run amok (fashion equality, folks; the rest is fine), Prada’s masterful invocation of basics to create fashion proved that, in the big picture, a fashion hierarchy still exists. The view of the top is pretty great.