Her first ready-to-wear line reflected many of the same themes as her handbags, such as rainbow stripes and accordion pleats flower cutouts 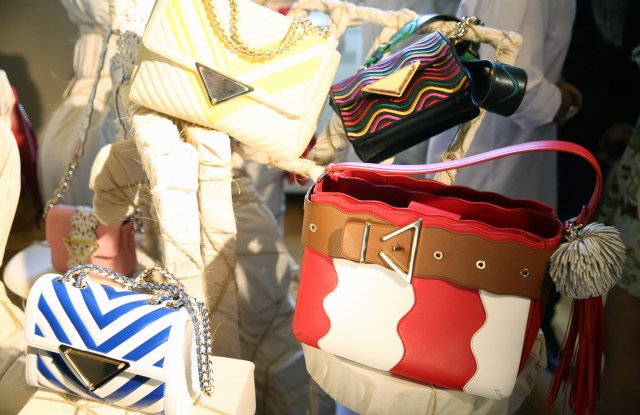 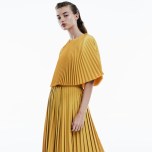 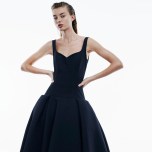 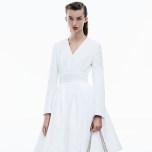 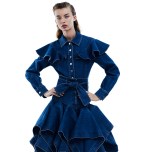 For handbag designer Sara Battaglia, extending her namesake bag line to include ready-to-wear was a natural progression. “I have fashion DNA, I was sketching since I was 6 so I said, ‘why not, I really feel it,'”  said the designer Sunday at her first clothing presentation, which also featured her colorful bags. Working in a mostly white, yellow, black and denim palette, the collection almost seemed like a canvas to highlight the bags. In fact, in some cases, such as a white blazer and shorts or a crop white top and culottes, the same rainbow wave-stitch pattern was also used on bags. A short pleated capelet top was reflected in a pleated accordion bag and the multicolor gusset panels on a day bag. Other features of the tightly edited collection were ruffles running down the sleeve of a blouse.

Citing influences from the feminine silhouettes of the Fifties, a yellow nipped-waist flared jacket, a full pleated skirt or a white jacket-dress with a fitted bodice and full skirt worn with a wide cumberbund belt that cinched the waist were updated takes on Christian Dior’s post-war looks. Leather studded flower cutouts that covered a white leather bucket bag also appeared on a Sixties-inspired shift dress worn over a long crisp white shirt, and an early Seventies-looking pale-peach blouse with a pleated sleeve was worn with a rainbow-striped leather miniskirt that echoed the same pattern in the rainbow bags (rainbow is emerging as an early trend in accessories for spring).

Lest it all sound too retro, the designer approached the heavy-on-separates collection intentionally to offer variety in the ways to wear pieces — together for a more traditional look or separately with jeans or T-shirts for a more modern look. Her philosophy is to take the clothes from day to the “cocktail hour.”

Battaglia is venturing into a new arena from a retail standpoint for her high contemporary collection; this is a whole new set of buyers to seduce, but she seems to have hit the zeitgeist of the moment. Those stores and stars of social media alike such as sister Giovanna won’t be able to resist having these pieces in their wardrobes or on their selling floors.