The designer unveiled his Adidas Originals collection and a stellar surf-inspired spring lineup. 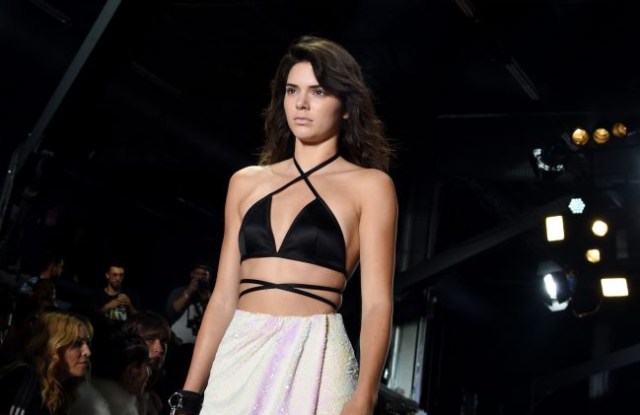 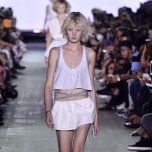 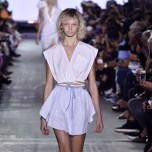 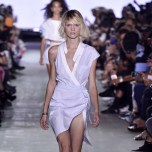 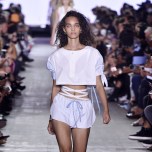 Alexander Wang might have set a record for the number of collections featured in a single runway show. There was his spring women’s collection; his spring men’s collection; select items from resort 2017 (in stores in November), and finally the debut of Wang’s Adidas Originals collection, which WWD first reported was in the works in July. Where to begin?

It would be unfair to say that the Adidas collaboration, an 84-piece unisex lineup, revealed during the finale after a cryptic film stylized to look like security camera footage rolled, stole the show — which was a high-energy zinger from start to finish — but it was set up to stay on your mind. For good reason. “In the culture of immediacy,” read the Adidas-Wang press release, “a limited capsule drop will be available on September 11th exclusively by way of a pop-up truck in New York City.” The truck’s schedule was available by calling 917-325-3342 and following @AdidasOriginals and @AlexanderWangNY on Instagram and Snapchat. Rocco Ritchie, son of Madonna, who attended the show with her daughter Lourdes, stars in the campaign — his first — along with Hanne Gaby Odiele, Binx Walton, Lexi Boling, Luke Storey and Chris Fernandez.

Juergen Teller was behind the lens. It was difficult to see the merch up close as Wang led a mob of models dressed in the Adidas gear down the runway, but Team Wang’s color is black and they love to bend the rules. It looks like his Adidas signature will be the iconic trefoil logo turned upside down so it looks a little like a pot leaf. Here’s predicting this partnership is going to be a happy marriage and a mad hit with the kids.

Moving on. The spring collection was delightful. Youth culture and irreverence are key tenets of Wang’s brand, but at times (ahem, last season) the tricks have come off as juvenile. Here, he zeroed in on surf culture, which provided a pipeline of fresh material that Wang handled with the balance of irony, relevance and, most importantly, good design that make the mayonnaise. Rash guards were interpreted into slinky dresses with neon seams. A black bikini top laced around the torso was worn over a sequin skirt that wrapped like a beach towel. A cropped fluorescent-pink sweatshirt with a palm tree print bore the phrase “mind detergent.” Wang also coopted a cliché Eighties-Nineties thorny tattoo that has surely been the target of many a laser-removal procedure into a print, and gave the ultimate symbol of slacker culture — the bathrobe — a witty upscale treatment in shaved mink. Flat sandals had straps that looked like surfboard ankle leashes and necklaces looked like lifeguard whistles. But not everything was a literal surf reference.

Some of the best pieces riffed on crisp men’s shirts sliced into crop tops, bralettes and flirty boxer shorts. A rose-printed cropped shirt worn over tailored drawstring board shorts with lace trim hit the bull’s-eye for the flirty tomboy and was gimmick-free. Looks like Wang caught the perfect wave this season.