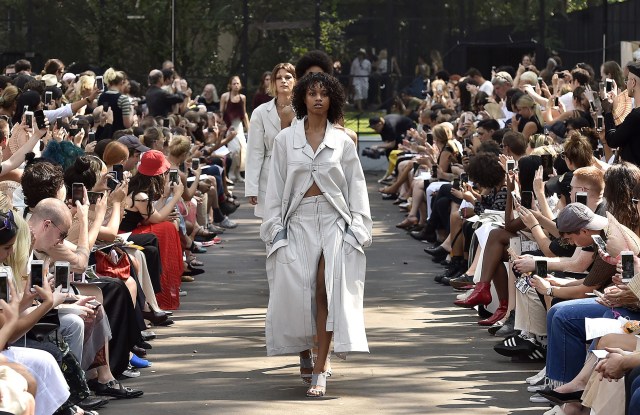 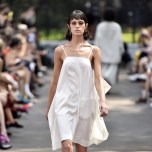 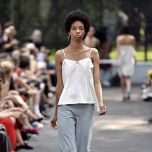 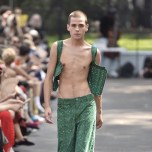 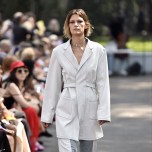 There weren’t any overarching concepts at work this season for Zoe Latta and Mike Eckhaus. The Eckhaus Latta spring tribe — a diverse bunch across race, gender, body type and age — walked a makeshift runway outdoors in Seward Park on the Lower East Side to the beat of a live, moody soundtrack by Dev Hynes. “We were really focused on fit and elevating the clothing, which isn’t any different from any other season,” said Latta matter-of-factly after the show, estimating that half of the collection was made from deadstock fabrics. “We’re just interested in making clothing that we’re excited about, that we could wear during the day,” added Eckhaus. “It’s not anything crazy, necessarily.”

He was right: There was nothing crazy about the cool denim look that opened the show — an oversize jacket over a spliced, zip-front skirt in a light, faded wash. Other denim looks were two-toned, while high-waisted jeans — some with layered, flared hems — featured the label’s signature patch pockets at the rear. They paired well with deconstructed knits, which included a long-sleeved mint green sweater with elongated side ties, or T-shirts and sweatshirts emblazoned with “Election Reform.”

When the Eckhaus Latta girl dresses up, she does it in a royal blue corduroy corset laced up in back, or a metallic silver silk and sheer chiffon tank worn with roomy, thick-ribbed white corduroy pants. The look that closed the show — a weightless gray nylon parachute jacket, listed on the show notes as a “garbage bag summer parka,” worn with a royal blue zip-front corduroy skirt — was another unusual pairing, and yet it worked. Those choices lend the bicoastal brand its arty, nonconformist, post-gender sensibility, one that this season leaned toward simple, easy sophistication.