The uptown ball scene and downtown club scene made for one fun party on the Luar spring runway. 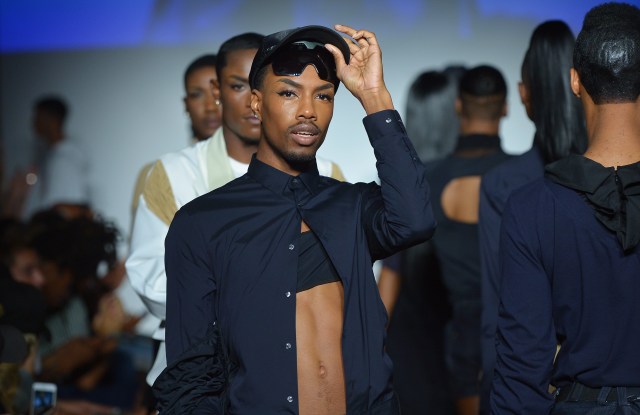 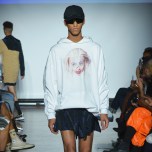 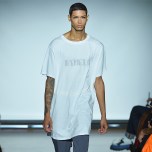 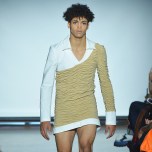 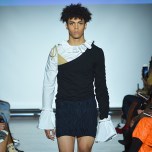 Gender fluid has become the new normal for a segment of the fashion market. Designer Raul Lopez, who designs the label Luar (his first name spelled backward), has been working the genre for a while (he was a founding member of Hood by Air before venturing out on his own). Spring 2017 was a comeback of sorts: Lopez took a hiatus for two seasons, describing himself backstage after his show as “a caterpillar. I kind of felt like I had to go into hibernation to get myself together to become this butterfly. Like the butterfly effect.”

The collection that emerged showed some serious thought — a well-realized lineup of primarily shorts, shirts and dresses that borrowed heavily from both men’s and women’s classic wardrobe pieces: a men’s suit jacket was pieced together with a ruched and draped stretch fabric to become a bodycon minidress, for example, while shorts were done in traditional men’s suiting fabrics (with extra fabric “flaps” on the sides) and paired with reworked men’s shirts, often form-fitting and cutout in the back.

A white hoodie with custom designs of faces, done in collaboration with Spanish artist Yessi, appeared throughout, and when paired with a long white ruched wrap skirt, drove home the gender-fluid point of view. So did the runway walked by African-American models and club kids, some transgender, others that beautiful intersection of male and female that took its cues from the uptown ball scene of Washington Heights (think “Paris is Burning”), as each tried to out-Vogue and out-model each other, making for a fun and refreshing fashion display.