The design trio expands their knitwear techniques for an expanded spring lineup. 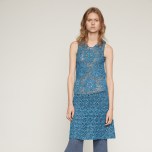 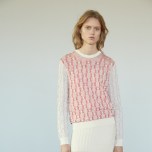 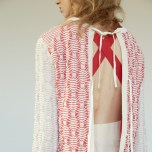 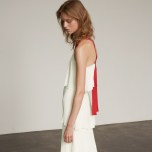 Solidly establishing itself as a retro Americana knitwear company, CFDA/Vogue Fashion Fund finalist — and winner of the Swarovski Award for Menswear — Orley presented its women’s collection in its showroom on 38th Street. The designers — brothers Alex and Matthew Orley and Matthew’s wife Samantha — built upon some key established concepts such as a techno weave knit twinset or micro waffle-weave tube skirt.

But they also took their wonder-weaving skills to the next level. The work of the late installation artist Mike Kelley from their hometown of Detroit helped set the mood. The designers have also always felt a keen connection to the aesthetic of the everyman-in-everyday situations that ultimately has an “eraless” (something that doesn’t get old, per Urban Dictionary), somewhat nostalgic feel, but any decade references from this trio are subtle.

A V-neck sleeveless knit dress with a tucked and ribbed waist and pleated kick-vents on the side of the skirt had the air of a Twenties tennis dress. A teal crochet dress and a captivating multicolor T-shirt constructed from individual crochet circles sewn together were a nod to the Sixties but with a thoroughly modern vibe.

Highlights included a pleated full skirt in multicolored gingham that was paired with a coordinating T-shirt. A long, tiered dress was layered with a whisper-thin, semi-sheer crewneck that was open at the back but connected by ribbon ties.

Also noteworthy were mini-pleated knits (the group cited Issey Miyake as an influence, though the connection ends there), jacquards, intarsia plaids, ginghams and a wave-slash-bubble pattern. While referencing the past, the brand continues to push the boundaries of knitwear into the 21st century.