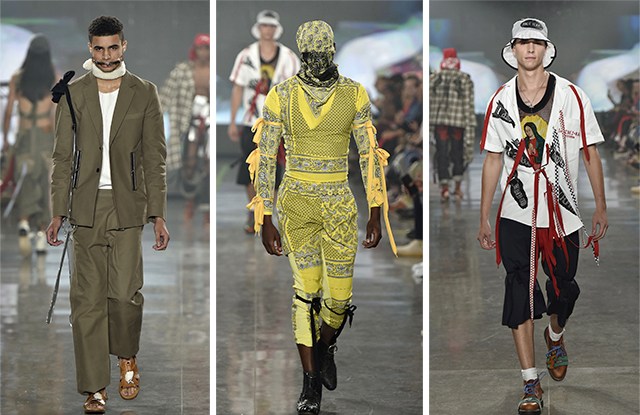 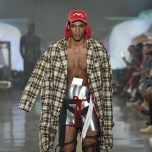 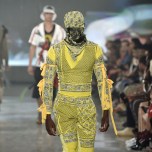 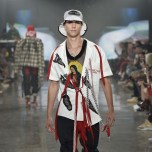 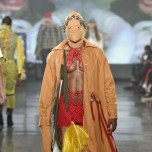 If you made it to your seat at the VFiles show without suffering a migraine or panic attack — having survived the mobbed-door scene at Spring Studios, which could only be likened to fashion week’s very own Hell on Earth — you were already winning, sort of. Between the whirling strobe lights and the 45-minute delay, VFiles ultimately provided all you needed to get there. Everything changed for the better once the show kicked off with a trio of performances by the Waffle Dance Crew; a few Team USA Olympians, and Unlocking the Truth, the Brooklyn-based metal band whose members have an average age of 15.

The energetic and predictably wacky show, DJ’d by A-Trak, highlighted the designs of five emerging talents, beginning with Rushemy Botter, a men’s wear designer and Royal Academy of Fine Arts Antwerp graduate whose gender-bending styles featured elements of suspension. His opening look, a pale blue, off-the-shoulder jumpsuit styled with a headpiece that displayed the words “Enemy of Terrorism,” set the tone for his politically oriented collection, which also featured the phrases “Enemy of Racism” and “Enemy of Corruption.” (At one point, to the shock and delight of the audience, the rapper Young Thug — one of five mentors to the VFiles designers this season — stood up from his front-row seat during the show and stopped one of Botter’s models to adjust the collar of his languid white suit.)

Next up was Ground Zero, designed by Hong Kong-based brothers Eri and Philip Chu, whose collection mixed ultragirly and athletic sensibilities. One look featured bubblegum-pink shorts with a ruffled hemline, a matching bomber jacket and a baseball cap, fusing the references in a single outfit. Elsewhere, the label’s cropped hoodies and wide-leg denim captured street trends of the moment.

Transparency was the focal point of the women’s collection by Song Seoyoon, a New York-based The New School’s Parsons School of Design graduate. She rendered her looks with clear plastic overlays, most of which were full-body length, lending her lineup a wacky utility vibe inspired by the Garment District factories where she produced it.

Sanchez-Kane, a Mexico-based men’s wear brand designed by Barbara Sanchez-Kane, opened with a model in a colorful suit and a pillow over his face and closed with a female model wearing striped trousers, metallic pasties and little else.

The show closed with the designs of Alessandro Trincone, an Italy-based designer and graduate of University La Sapienza di Roma and Osaka Bunka, who showed his looks at a slower pace to solemn music. His men wore ruffles, bows, bonnets and gigantic hats that riffed on parasols, all of which turned traditional masculinity on its head — literally.