A visit to the Shetland Islands inspired a lineup packed with Scottish motifs (kilts, chunky knits, lace) that bridged tender and tough. 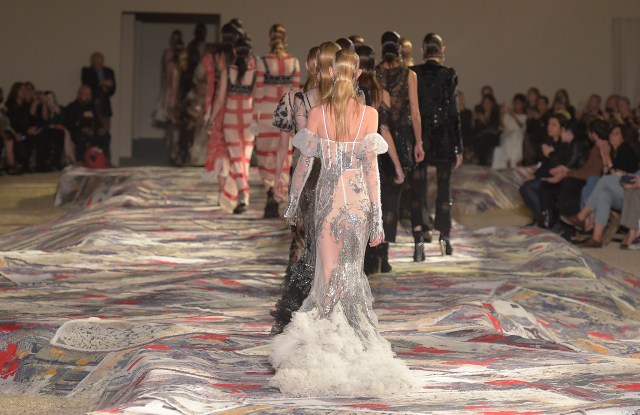 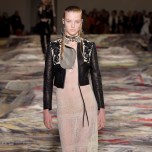 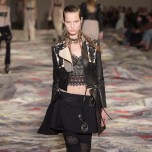 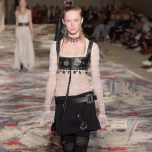 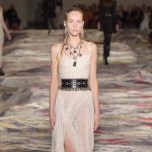 There’s a fierceness to life lived at the mercy of the nature’s volatility — and a raw sensuality. It has inspired artists, writers and just plain romantics for centuries. Alexander McQueen’s Sarah Burton recently visited the Shetland, a rugged cluster of Scottish islands. She found a wealth of material that she channeled into her breathtaking spring collection.

Burton may be a romantic at heart, but she’s no softy. Her lyrical aesthetic depends upon the complicated interplay of tender and tough that more often than not plays out on her runway. So it was with her exquisite spring show. She showed in a new venue, an orangery at the Luxembourg gardens in which she had installed a voluptuous, bumpy runway intended to reference rugged island terrain. This was covered in hundreds of small, overlapping patterned carpets, a reference to the Shetland wedding tradition of sewing together the rugs of two families to celebrate their union.

As a designer, Burton is both storyteller and champion of craft. Here, she celebrated the artisanal wonders native to Shetland, both sturdy, colorful sweater knits and diaphanous, intricate laces, thin enough, as the legend goes, to be pulled through a wedding ring. She crafted the latter into beguiling tops and dresses, delicate as a whisper. Sturdier knits featured powerful patchworks of traditional Fair Isle-inspired patterns. There were also dresses in humble cotton voile prints. Her story was of naturally gentle women hardened by circumstance. Even at their most wistful, they took on the markings of tribalism — kilt; hardware embellished leather harness or belt; a more recent tribal insignia, a biker jacket. For her tailoring, Burton worked in dark Celtic checks, their lack of color emphasizing the shape and defiant attitude of, for example, a precisely cut jacket over kilt over trousers.

Burton is a staunch practitioner of expression through embellishment. Here, she drew on local wildlife imagery, turning flowers and beasts into intriguing embroideries. And she layered on Celtic-inspired jewelry: heavy-on-the-metal chokers, bracelets and pins. It all celebrated Shetland while imparting the aura of the warrior princess, a lineup of latter-day Boudicca types.

The show closed with a pair of embroidered gowns, their lavish handwork as deliberately uneven as it was arresting. They depicted a shipwreck. By invoking that motif, Burton referenced one of Lee McQueen’s most memorable collections, and by extension reaffirmed the primary tenet on which the house was founded: that beautifully dissonant dichotomy of tender and tough.