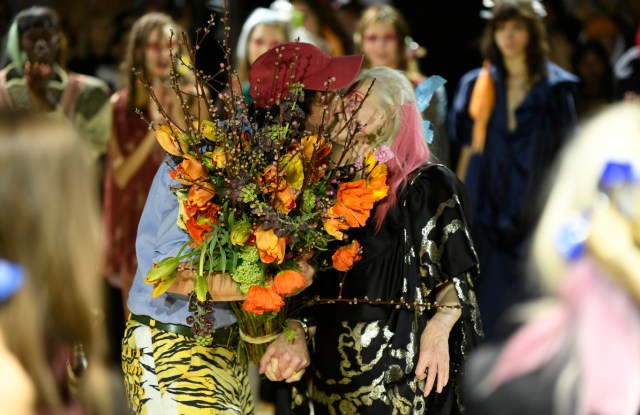 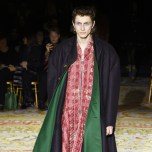 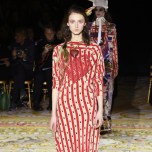 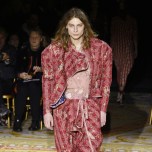 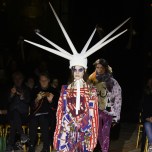 Going back to his roots, Andreas Kronthaler filtered the house’s absurdist punk heritage through an Austrian storyline hooked, for the most part, on the Wiener Werkstätte movement. (The queen mother of punk herself, Vivienne Westwood, did two turns in the show, much to the crowd’s delight.)

Gustav Klimt was the main protagonist, conjured in the collection’s geometric prints, and on a male model in a long, sleeveless floral smock recalling the kind of free-flowing “sacks” the artist liked to wear when he was painting, and that he could easily hoist to have his way, said Kronthaler backstage. “He was terrible, he is said to have fathered more than 50 illegitimate children in his lifetime.” More wearable spins included a skinny yellow pant and sweater covered in paint splashes, while leggings and T-shirts sported doodles of breasts and penises.

A voluminous black hooded cape dress covered in fiery motifs added drama. “They were so inspired by Africa in those days,” Kronthaler explained. “There were traveling exhibitions and Klimt went to one in Vienna in the late 19th century, and that’s where all these spirals and triangles and squares came from, because they were using that in their jewelry and fabrics, or whatever.”

But right from the opening look — a Tyrolean-esqe navy felt skirt and jacket embroidered with crafty flowers — a strong folkloric homage to Kronthaler’s Austrian homeland also came through with great oversized quilted ensembles in a dusty rose print based on a pair of old curtains that would have hung in one of Vienna’s bourgeois houses at the time. A military mood also surfaced in the long quilted khaki coats and quirky looks piling on an accumulation of fringe, tassels and ribbons, with Kronthaler also looking to the theatricality of the era’s costume parties.

The designer supersized and padded out proportions on tailoring, spinning quarterback shoulders on some of the looks, while the dress silhouettes moved between updates on the classic Vivienne Westwood deconstructed, drapey satin dresses and silhouettes inspired by the turn-of-the-century style of Klimt’s longtime companion, the fashion designer Emilie Flöge.