Olivier Rousteing went for a more covered-up collection — with plenty of windows to the flesh. 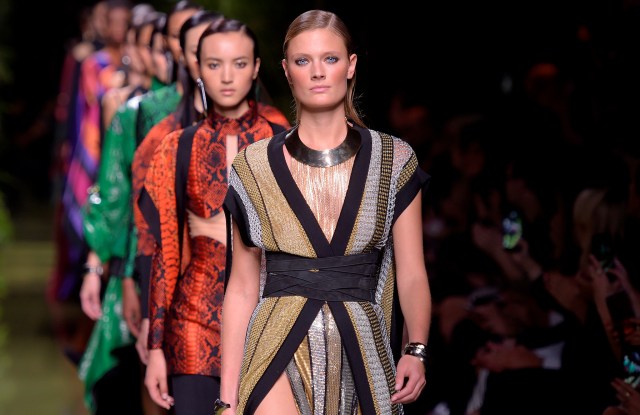 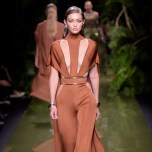 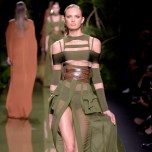 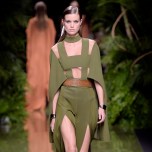 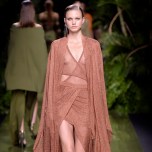 “My Balmain army has shed its armor,” Olivier Rousteing said of his spring collection, citing a wish to “open up the house to a wider audience.”

Here was one of the young designer’s most covered-up collections yet, dominated by caftans, blanketlike capes, cocooning dresses and knit pants galore — the latter with one or both legs slit to the heavens.

To be sure, covered up is relative, and Rousteing opened plenty of windows to the flesh via cutouts or panels of transparency, some of which the models adjusted for modesty as they stalked a green runway surrounded by potted palms. But he scaled back on hardware and tassels, yielding only to the flash of metal mesh and crystals for the finale gowns.

A good chunk of the collection was knitwear, of the sparkly, flimsy or clingy variety, often patterned with stripes and occasionally zigzags. A lot of it hung in scarf points, and some of it was as sheer as cobwebs. Think Missoni on female Viagra.

The collection was true to Rousteing’s racy side, but with more drifting and free-hanging fabric. “Fluidity, relaxed sensuality and softness,” he said in his show notes, listing the new weapons of his battalion of bombshells, which included Gigi Hadid, Doutzen Kroes and Natasha Poly.

Kim Kardashian, who was accosted by a prankster in Paris earlier in the week, attended the show with the rest of the Kardashian clan sans Kanye West. Afterward, they were whisked out by their vigilant bodyguards: an army of two.