With a big help from artist Dan Graham, Phoebe Philo made her spring Céline show a beautiful reflection on the power of the everyday. 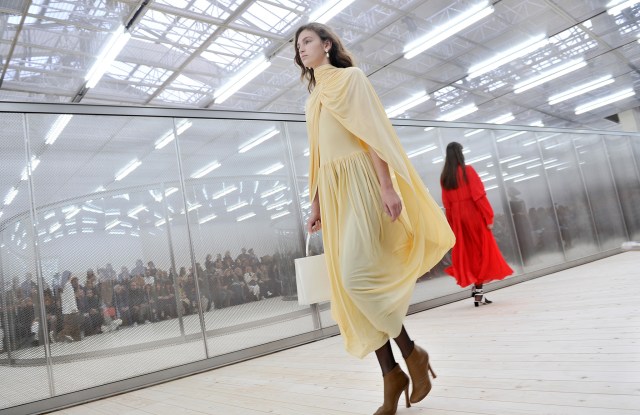 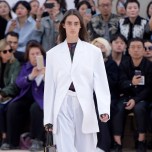 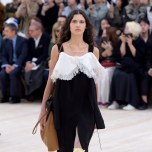 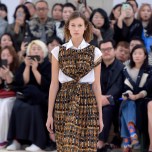 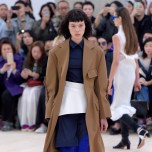 In the words of a philosopher by the name of Ferris Bueller, “Life moves pretty fast. If you don’t stop and look around once in a while, you could miss it.”

With a big help from artist Dan Graham, Phoebe Philo made her spring Céline show a beautiful reflection on the power of the everyday, the nuance of human nature zinging by us at all times and the role fashion plays in telling that story. The set for her Céline show was one of Graham’s pavilions, an S-shaped, two-way glass structure — reflective and transparent — positioned in the middle of an open space through which the models walked. The cast of personalities, each girl projecting individual style, came and went in all directions with the graceful chaos of an exceptionally fashionable afternoon at Grand Central station.

“Social interaction, fantasy and life in general are the main driving forces in my work,” said Philo in notes released after the show. “Dan Graham’s installation is therefore an interesting and powerful way for me to present my collection to the audience.” The show was an eye-opening display of complexity and perception, partially due to the set, which offered those seated in the right place literal self-reflection, but mostly because of the clothes. Philo thoughtfully created ensembles that made you consider the circumstances, decisions and surprises that drive a person’s daily existence. Traditional clothes came in unusual proportions with an emphasis on deconstruction, offbeat colors and counterintuitive styling. For example, an oversize clinical white blazer and matching pants with casually rolled cuffs were worn over a rich floral printed top and flowy pants that spilled out from under the white pants. A group of backward shirtdresses — one white, one blue and one a clashing combination of fluorescent green and magenta — looked like a men’s shirt on top with a drop-waist pleated skirt.

There was no single dominant look to zero in on or easy way to describe the pieces. Tailoring was mannish and oversize, but there were overtly womanly things too, specifically artfully sensual white dresses. One style with raw edges and a corseted waist featured black crotchet that looked like spider webs over each breast. Two other white dresses had anatomical abstract blue paint over the torso. There were soft, draped and gathered jersey dresses that billowed in the air and outerwear that appeared torn apart and cutout.

Everything was elevated to Céline and Philo’s standards of chic, but the message wasn’t about luxury life, but getting through it. The styling lent a sense of the haphazard realness to the look. Some of the girls wore outrageous oversize frame bags, or mismatched shoes that made you wonder. If you passed someone on the street wearing one yellow boot and one brown one, would you think she was making an eccentric fashion statement? That she must’ve been in a hurry, distracted or got dressed in the dark? Maybe she’s a little crazy. Such is the beauty and flaw of the human condition.