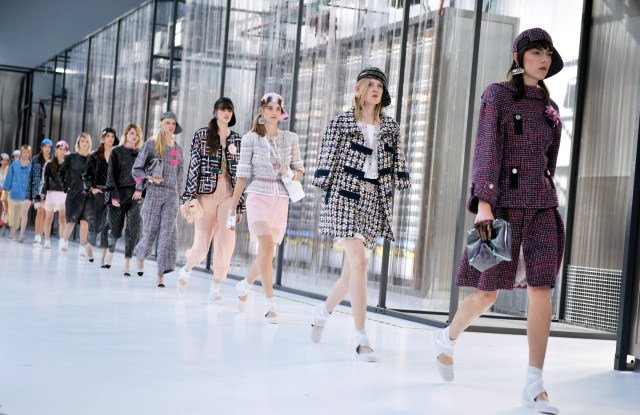 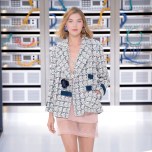 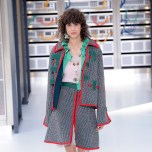 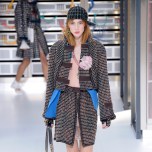 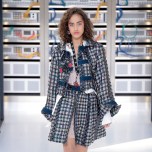 At Saturday’s Nina Ricci show in an upper-level space at the Grand Palais, one entered to find the view to the floor obscured by huge partitions. Their purpose: to hide the Chanel set under construction below.

On Tuesday morning, the big reveal: Welcome to the high-tech world of Karl Lagerfeld’s mandate and Alain Wertheimer’s wallet. Lagerfeld had the space transformed into an enormous data center, all cables, cords, grids and industrial-tape markings. “It’s something of our time,” he said during a preview. “The whole thing is like booting up, wiring up.”

While one could argue that Lagerfeld is in a constant state of wiring up — Lord knows, he certainly never powers down — for spring he embraced the concept with literal cheekiness, taking inspiration from tech wires and digital graphics. Lest he make a straightforward foray into wearable tech of the Rue Cambon sort, he played the cyber-chic motif against delicate lingerie pieces, christening the show — what else? — “Intimate Technology.”

The pairing worked on many levels. The fusion of classicism and forward motion is what Lagerfeld’s Chanel all about. And should one wonder about its cross-general appeal, he or she need only glimpse the cadre of clients who turn out at every show, this one included, some working head-to-toe runway, some incorporating a soupçon of street (or faux-street), all flashing their regalia and radiating pride of ownership with every selfie.

Lagerfeld used his theme as a ruse for an almost manic pattern display. That is, after he opened with purist black and white — on robots. If anything is possible in the digital world, the same can be said of Chanel when it comes to materials development, starting with any intensity of tweed. He took the primary brights of cable cords and worked them every which way, from confetti to gridlike constructions. As for his prints: laser optics so dizzying in they should come with a warning label.

The brilliance was in the juxtaposition with lingerie. Though Lagerfeld loathes any suggestion of retro, he focused on a cosmetic pink range that was standard for unmentionables in the Twenties and Thirties. These colored the gentlest underpinnings — slips, camis, lace shorts — as well the occasional robe and what was once called a bed jacket. They registered against the tweeds with delightful dissonance, the collection’s primary concept. Within that, there were countless ideas beginning with the suit silhouette — the classic suit; versions with A-line skirts, box-pleated skirts, straight skirts zipped up the front; jackets short, long, constructed, cardigan-cut; the wide-leg pantsuit. And there were suggestions for Chanel sportif: off-beat polish in tweed jacket over pink silk slips or pants frilled above the ankles; mixed pattern madcap in chunky sweater over schoolgirl tweed skirt.

Yes, there was even a moment or two of calm. Case in point, of all things, a loose denim jacket over pink slip and webby hose. Just Lagerfeld’s way of powering down.