The collection channeled countercultures and subcultures; rebels, thinkers and poets. 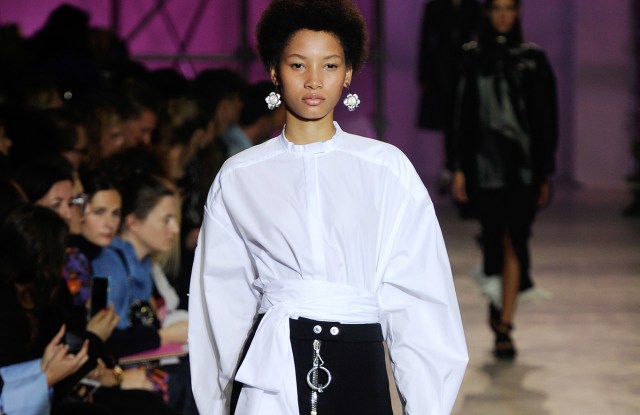 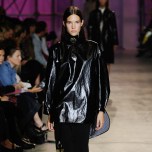 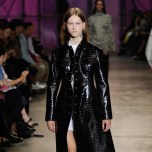 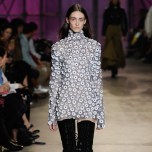 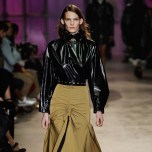 Kym Ellery used new volumes, intriguing textures and an abstract, fiery red-and-black print to express her tougher side while keeping things elegant and elevated. She revisited rebel codes, looking to “the kinds of personalities who birthed countercultures and subcultures; rebels, thinkers and poets.”

Cropped blousons in a technical gabardine with strong collars and bunched sleeves nodded to Japanese girl gangs. There were punk-scented pieces like glossy, bright pink utilitarian pants gathered with ties at the ankle; cool V-neck T-shirt tops in superlight, black laminated cotton, and hard, sculptural coats and flares in croc-embossed black leather with a back-off vibe. (Even the line’s earrings — based on handlebars with their headlights dropped down — had attitude.)

The hand-embroidered, double-mesh daisy dresses had a strange beauty to them, with footwear going from metallic versions of the label’s signature ankle boot to clompy lace-ups — Ellery’s take on the bovver boot, only with a hiking boot spin — ending at the thigh.

The designer transformed looks into modern statement pieces with just a few creative tweaks. Among the standouts was an oversize, single-breasted navy suit customized with rows of brown buttons on the pants and sleeves, and white ruffles trailing from the elbows, which had vague Goth undertones; the patterned velvet pieces, in dark and fresh tones of red, added a poetic note.

Softening up the mood with long, skinny skirts with contrast kick hems and deconstructed draped silk dresses, Ellery kept up the label’s tailored-yet-fluid feel while steering her aesthetic somewhere new — something we can expect a lot more of now that the Australian designer has officially moved to the City of Light, with a Paris atelier in the works.