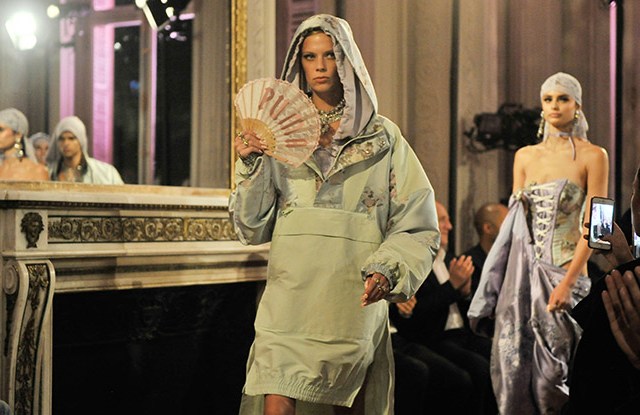 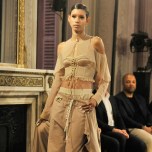 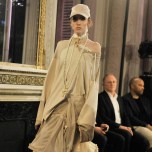 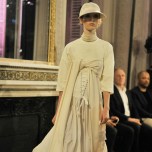 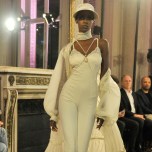 Welcome to Rihanna’s pink palace. That would be Paris’ Hôtel Salomon de Rothschild, the 19th-century mansion that has hosted collections by the likes of Valentino haute couture and Yves Saint Laurent. On Wednesday night it was home to boys in pearl chokers, mesh camisoles and pink Chinoiserie onesies and girls in sweatshirt bandeaux, hoodies and lace do-rags in the name of Fenty Puma by Rihanna. The singer did not tiptoe in as with last season’s debut, but raised the bar considerably for her second effort.

“It’s nerve-wracking,” she said backstage pre-show, wearing a floor-length bubblegum pink track jacket done in broderie anglaise from the spring collection. “Paris is the world’s capital of fashion, so there’s a lot of pressure; a lot of people whose opinions I respect are going to be giving me reviews.” This was a convincingly sincere statement from a woman who has performed before half a million people over the course of her ongoing Anti World Tour.

Inspired in part by 18th-century French style, the collection was a mélange of extravagant corsetry, Chinoiserie, lace, pearls and underpinnings done in shades of mint green, lavender, pink, blush and white — for him and her. “Obviously Puma is a sport/athletic brand,” said Rihanna. “It was a challenge to mix those two and make them make sense.”

But once she introduced the modern world of athletic street stylings to French courtesans, they appeared to get along famously with ample ground to cover: apparel, shoes, bags, jewelry, headgear galore. The silhouette was long and exaggerated or short and tart, all of it worn in states of cooler-than-thou dishabille. Sheer parachute windbreakers were traced with tiny ruffles, worn long like a robe or short like a babydoll. There were corsets laced with shoelaces and bustiers worn over lace-crotched sweat pants. The models came wrapped in pearl necklaces, cameos and pearl and crystal lip and septum piercings, as well as lace baseball caps with netted veils embroidered with mini Puma tigers. On their feet were rugged, exaggerated creeper/construction boot hybrids and laced, pointy-toe booties.

It was delightfully zany, maximalist, unmistakably Rihanna and unlike anything else in the sport/athletic fashion arena, even with so many players in the game.