The designer made the lacy black bras and other bedroom finery the stars of his fine and intricately wrought collection. 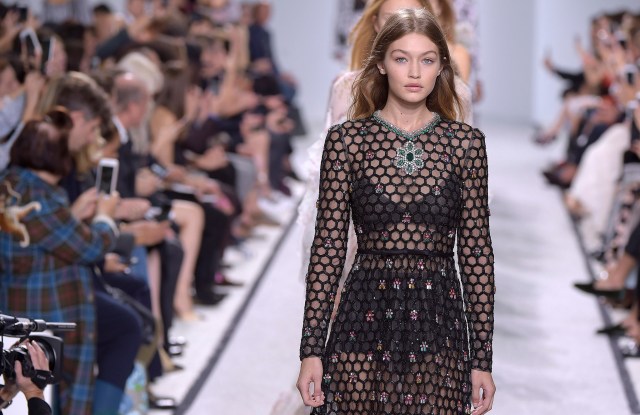 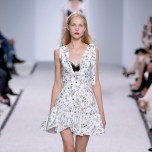 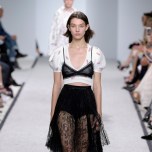 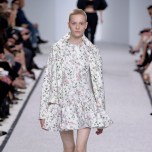 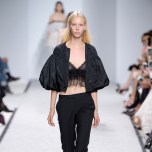 “It’s not about Simone de Beauvoir,” Giambattista Valli insisted backstage about his alluring spring show, even though the covers of two of her key books — “Memoirs of a Dutiful Daughter” and “The Coming of Age” — were the only things tacked to his inspiration board. The designer said he read them back-to-back while vacationing in Positano, Italy, this summer.

OK, then how about Simone de Boudoir? For Valli had made the lacy black bras and other bedroom finery the stars of his fine and intricately wrought collection.

Occasionally the bra was worn as a top under a puff-sleeved bomber jacket or opera coat in black taffeta. Sometimes, just half of one poked out of a one-shouldered dress in drifting, ruffled silk chiffon. Or it formed the top of gossamer gowns in tiers of point d’esprit lace, which accrued embroideries or came dotted with crystals.

There was a hint of Marie Antoinette in the sugary colors, puffed sleeves and frothy ruffles. What thrust the look into the present day were the sporty touches like a hint of belly under a bubble-shaped top, or items like nylon Windbreakers, here one up in china-pattern florals.

Valli said he wanted to bring ideas from his latest couture collection into everyday items — and these would be for the fancy ladies lining his front row, from Salma Hayek and Bianca Brandolini to couturier Ulyana Sergeenko.

If there was anything “de Beauvoir” about the collection, it was its Frenchness and the way Valli reflected on the feminine essence of his brand. He allowed that the collection was “introspective.” He should navel gaze more often.