Humberto Leon and Carol Lim’s treatment of the holy grail of disco — Studio 54 — was well done, not too literal, not too retro, not too over the top. 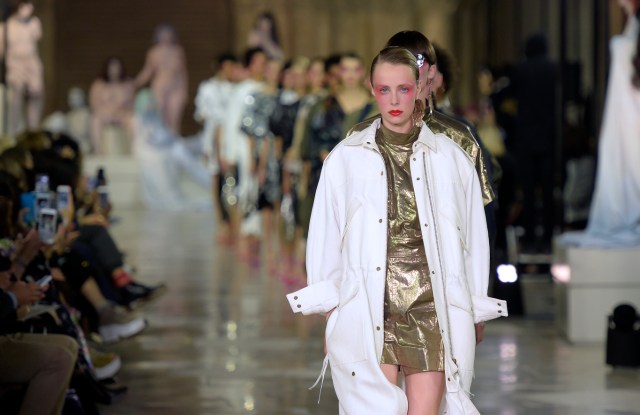 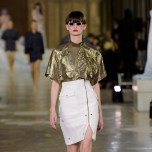 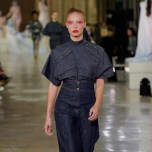 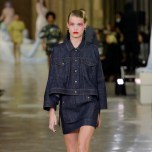 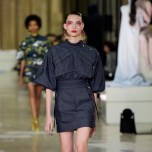 Humberto Leon and Carol Lim threw you off the scent of their spring Kenzo collection with its set. Guests entered the Cité de l’architecture et du patrimoine to see a lot more human anatomy than they bargained for, as living statues with real, non-model bodies posed in the buff like the antiquities surrounding them. The sight of enormous breasts cast in green paint, bare male genitalia, an amputee and women made to look like 15-foot-tall statues triggered some shock, awe and a few giggles, though it did nothing to set up for the show’s theme: Studio 54.

Before you roll your eyes at what is certainly a contender for title of most unoriginal inspiration, Leon and Lim’s treatment of the holy grail of disco was well done, not too literal, not too retro, not too over the top — but close on all accounts. What’s more, notes stated that the collection’s starting point was a hard-to-turn-down invitation to work with the archive of fashion illustrator Antonio Lopez, known for his heady, erotically charged work from the Studio 54 era. Additionally, Kenzo Takada showed a collection at the club in 1977. Grace Jones performed. Jerry Hall walked. It must’ve been fabulous.

Despite the disco spirit, the lineup featured a thick stock of day clothes. Workwear was everywhere, as it has been all season, and kept the Seventies-Eighties mood of big, rounded shoulders and narrow bottoms current. A long, white utility parka brought a gold minidress down to earth. A denim shirt with double, slanted utility pockets at the bust tucked into high-waisted cropped jeans looked very now. Things got wilder as the palette progressed from neutral blue, olive and khaki into flashier fare. A model wearing a shiny red tracksuit with a blouson top and tapered jogger pants and black sequined fanny pack looked like the second coming of Jones. Bra tops were layered over white shirts with pointed sleeves and slick black pencil skirts. There were tank dresses covered in giant paillettes and mini slips with diagonal panels of different shiny embellishments — paillettes and sequined fringe. It wasn’t subtle but it was controlled.

What Lim and Leon did with Lopez’s work highlighted how visually compelling it still is today. Jackets, skirt and T-shirt dresses were printed with collages of his famous Polaroids of famous models (Pat Cleveland, Hall) and their seductive red lips in crystal blue bathwater. The colors, expressive faces and mood deserved to be immortalized on a T-shirt.