Olympia Le-Tan offered up plenty of retro references, but they were more Swinging Sixties via Nineties revival than her regular geek-tinged pin-up look. 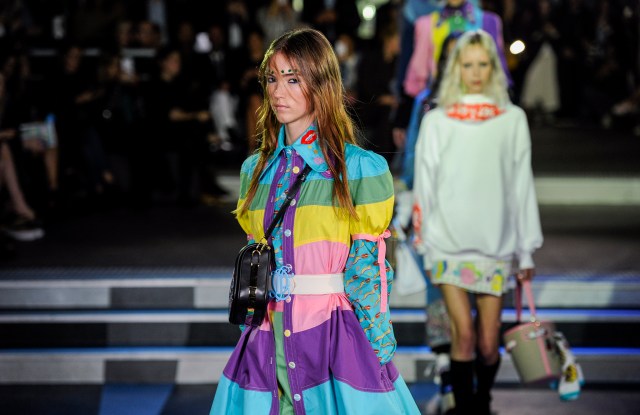 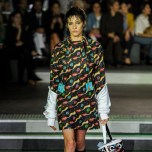 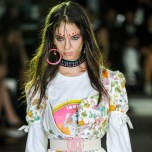 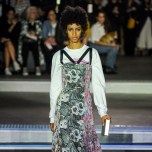 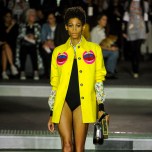 Olympia Le-Tan is straying increasingly beyond the kitschy vintage charm she is best known for. While there were plenty of retro references here, they were more Swinging Sixties via Nineties revival than her usual geek-tinged pin-up look.

Her signature vocabulary was still visible in several pointy collars, kick-hem dresses and the odd sweetheart neckline, but the general theme and vibrant color palette were otherwise most definitely of a different era.

Smoking lips and magic mushroom prints designed by Le-Tan’s artist and illustrator dad Pierre were among the motifs, as were plenty of patchworked Liberty fabrics, which were worked into dresses or on the hems of jeans and cuffs of jackets.

Streetwear references were also something of a novelty — it’s the first time Le-Tan has used denim, and there were even a couple of slogan hoodies.

Rainbows of embroidery played a strong role, used like patches on many designs, including wrap-over skirts and the final couple of dresses with their psychedelic subjects.

Le-Tan’s talent in creating a pastiche of vintage styles has made her designs distinct, but with this collection, which was admittedly lots of fun, she perhaps went down a path that is already too well trodden.