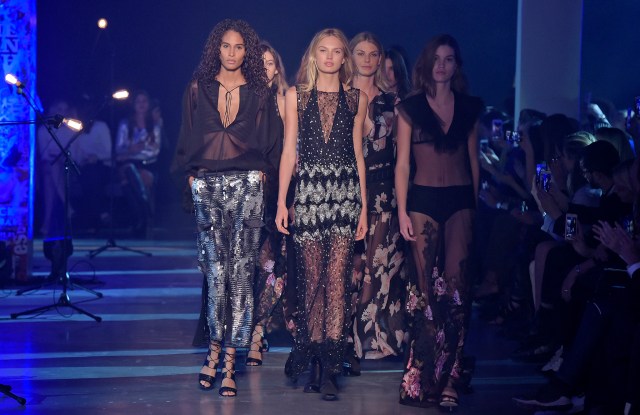 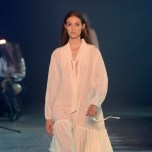 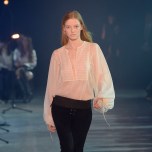 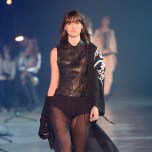 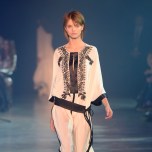 Redemption’s creative director Gabriele “Bebe” Moratti is opening up the musically inspired young brand in more ways than one. His collection for spring, which referenced “A Tale of Two Cities” — New York and Los Angeles, that is, in the Seventies and Sixties, respectively — offered up more color and romanticism than it has before, perhaps as the brand expands to please its growing following.

Dramatic floral prints covered flouncy, ruffled black gowns both long and supershort, and there was a colorful stripy motif too, used on a layered maxiskirt, for example. A flimsy sky blue gown with lace bell sleeves played out like a pre-Raphaelite fancy.

The romantic inspiration was also apparent in the military embroideries of several designs, including a tailcoat with an exaggerated train that trailed across the ground, or on several leather corsets. Such designs were where the splicing between whimsy and punk were most obvious, and there was still plenty of the label’s overt sexiness — even the most flowing gowns had deep necklines that left little to the imagination — for Redemption’s die-hard fans.

For them too, there was lots of black leather, several revealing sequin-embroidered gowns and pant suits — this worked well as a glittering pale pink tuxedo ensemble — and of course plenty of rock attitude. In one of the final gowns, Moratti paired black lace with panels of floral print in a look that verged on Gothic chic, but in a good way.

There was no doubt Moratti softened the message just a bit this season. A little more subtlety in the mix becomes his creations well.