This serene show featured frothy fabrics whorled around the body like candyfloss. 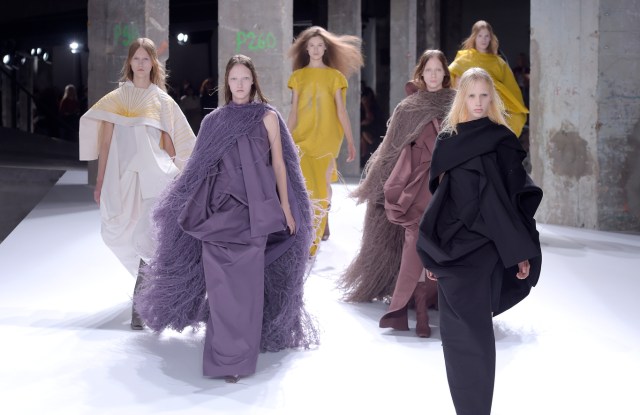 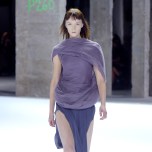 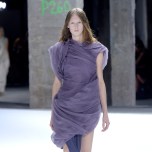 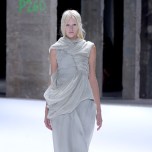 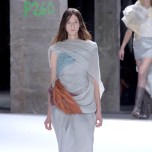 “What could be shocking from Rick Owens by now?” the designer mused backstage, not waiting for a reporter to answer.

“More color, and the prettiness,” he replied, quickly adding, “of course, my idea of prettiness is not everybody’s.”

Yet it was hard not be seduced by the designer’s serene show with its frothy fabrics whorled around the body like candyfloss, and its tubes of silky fabric lapping around the legs. As Nina Simone crooned “Wild Is the Wind,” the show climaxed with what Owens called “fog coats,” produced by Chanel-owned specialty atelier Lemarié, which specialized in feathers.

Owens had its artisans dye ostrich plumes — some the unseemly color of the dust you find behind your couch — and hand-knot thousands of them end-to-end to produce a waterfall of fluff cascading from the shoulders of silk gazar coats. The one in purple was lovely.

Needless to say, these are not see-now-buy-now clothes, and Owens didn’t balk when anointed a proponent of glacial fashion, a rebuke to the instant crowd. His hand draped compositions — volumes blobbing here, sagging there, jutting somewhere else — produce shapes that are hard to describe, and probably different each time a garment is worn.

Having grown up in southern California in the Seventies, Owens said his idea of free-spirited hot weather dressing was halter tops, cutoffs and hiking boots. There were abstract and luxurious versions of all of those stalking the runway, not forgetting oversize Windbreakers, one with the texture of a black Pierre Soulages painting.

Forgetting the variety of colors — from cream and rust to vivid yellow — these freeform silhouettes were familiar territory for Owens. He explained that he designs with a view to his entire body of work — or as an album at a time when most people just consume singles.

In fact, part of the reason he returned to Lemarié was the realization that his archive has holes in it, and he needs to fill them in: The designer let slip that the Triennale di Milano is to host a Rick Owens retrospective in 2018.