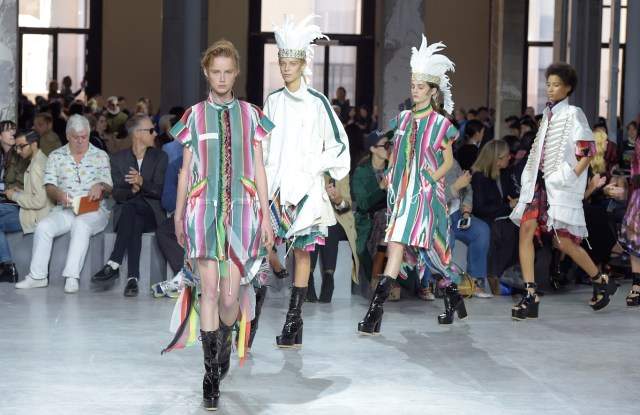 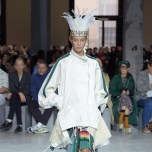 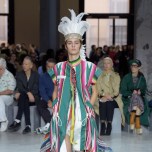 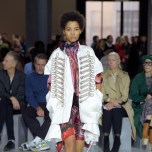 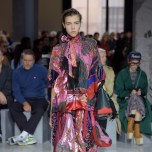 Chitose Abe juggled multiple personalities for Sacai for spring, wrangling the famous personal style of pop culture figures through history into a collection that, unlikely as it sounds, felt understandable and simplified by her complex hybrid construction standards.

Program notes ticked off a list of celebrity style icons — Jane Birkin, Kurt Cobain, Serge Gainsbourg, Jimi Hendrix, John Lennon, John Lydon (aka Rotten), Tommy Nutter, Pablo Picasso and Joe Strummer — whose favorite looks Abe made quick work of, splicing and dicing them. Perhaps because Picasso’s favorite Breton-striped shirt and checkered pants combination, Nutter’s Savile Row suits and Lydon’s electric plaids have long since been co-opted into uniforms by the masses, Abe’s versions didn’t come off as overly complicated as her multiple-garments-in-one approach can sometimes be. Essentially, she was working with classics.

But she streamlined things in other ways too. Each look starred a single, identifiable anchor piece. Merch! Picasso’s striped T-shirt and pants came as one on a trompe l’oeil oversized T-shirt dress fused with a laser cut low-slung plaid skirt. Birkin’s classic trench was just that, a trench with no additional pieces spliced in, although it was tweaked to Sacai proportions with oversized shoulders, an open back and belted low around the hips.

For the most part, the famous personalities kept to themselves. Cobain’s terrific leopard print shearling vest fused with distressed denim at the hem didn’t wander into Hendrix’s languid scarf dresses with tie-necks. Just because they’re both celebrities doesn’t mean they have to be friends.