In addition to some tony basics, a little Eighties-inspired bad taste made for an audacious collection of racy party clothes. 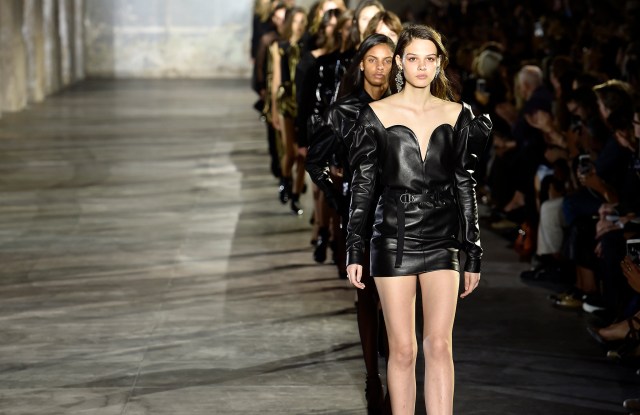 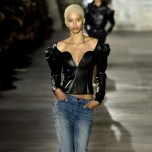 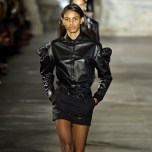 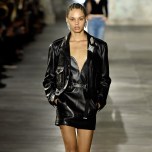 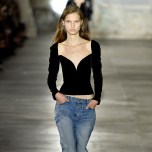 Anthony Vaccarello perused his run-of-show board during an afternoon preview. “I say, a bit of bad taste,” he declared.

A reasonable classification for a one-shoulder leather minidress cut to expose one breast, the would-be naked nipple covered with a little silver square of a pasty for a twinkle of faux-modesty.

Vaccarello intended the bad taste, wanting to capture the essence of YSL as the brilliant young renegade, before time and demons redirected his fashion into bourgeois familiarity. (That’s right, folks — YSL. The giant, illuminated signage suspended from a blue-and-red crane in the courtyard of the brand’s future headquarters heralded the resurrection of the iconic initials banned by Vaccarello’s predecessor, Hedi Slimane.)  “At the beginning, Saint Laurent was girls having fun, breaking the rules,” Vaccarello said. That his bad taste wasn’t wrought with the kind of ironic intensity to make it genuinely compelling won’t resonate with the girls for whom such fare is packed with the rush of discovery.

Vaccarello wanted to capture that side of Saint Laurent not in specific clothing references (despite a smoking section), but “in the freedom, in the experience, in the way she’s teasing you. It’s more like an evocation rather than a piece of clothes.”

Whereas Saint Laurent’s original customer pilfered from the Forties, Vaccarello said that girl today would look to the Eighties, in all of that period’s overstated (and sometimes under-fabricated) glory.

There’s a reason the Eighties, particularly the decade’s dress-up, dressed-to-kill side, have been much-maligned in the ensuing years. They were — how to put it? — largely hideous. And lampoon-able: oh-so-short and tight through the body, with endless sleeve and shoulder action. Vaccarello applied that genre aplenty, with asymmetry, retro sweetheart necklines cut to there and naughty sheer bodices. He showed variations of each over pants and skin-tight jeans.

Chic? No. Instagram heroin? For sure. In that sense, Vaccarello picked up where Slimane exited: with an audacious runway that will distill into recognizable merch. By night, the brash sexiness will tickle the starlet and influencer sets (keep Dad happy, girls — go for bra over pasties). More importantly, by day, women who pay will come calling for cool basics — leather jackets, jeans, slightly low-slung pants that nod but don’t bow to Helmut Lang.

The inauguration of Vaccarello’s tenure at Saint Laurent indicates that Kering wants Saint Laurent to remain a brand with a bread-and-butter of those tony basics (with racy party dresses a plus). And why not? Sales under Slimane’s watch skyrocketed. In that sense, this collection speaks to the Zara-fication of fashion. If you can’t beat ’em — and loads of anecdotal evidence is starting to suggest that, at the luxury level, you can’t — join ’em, only with better fabrics and constructions, and, if you’re lucky, a label resonant with must-have cool. If buy-now instant fashion is to infiltrate Paris, Vaccarello’s Saint Laurent wouldn’t be a bad place to start.