Yui Hashimoto’s silhouettes were voluminous and exaggerated, yet still exuded a cool elegance with contrasting textures. 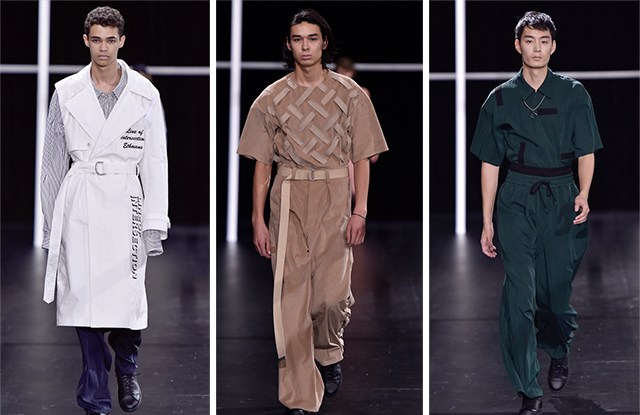 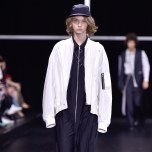 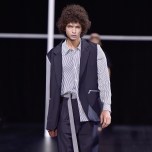 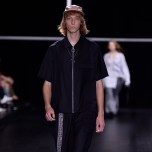 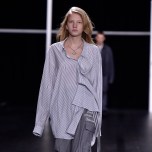 For the second consecutive season, Yui Hashimoto explored the idea of intersecting lines, combining various elements, materials and colors aiming to create something new and different. While there were definite similarities in theme and aesthetic to his last offering, he managed to take the concept further and turn out a collection that still felt new and unique.

Even before the show started, the collection’s theme was made clear through the use of white pipes crisscrossing the black runway. It was echoed in, among other things, the motifs used on the clothes, including stripes, graphic squares and the words “lines of intersection,” which were seen on garments like a one-sleeved trenchcoat, a pair of loose gray cargo pants and a salmon pink suit jacket with a single black sleeve.

Hashimoto’s silhouettes were voluminous and exaggerated — baggy pants were held up with extra-long D-ring belts, suspenders or shoelace-style drawstrings, and coats and jackets looked several sizes too big. Still, the clothes had a cool elegance due largely to contrasting textures: baggy denim jeans, crisp cotton shirts, fuzzy coats, silky track-style pants and lots of items in a lightweight suiting fabric.

An interesting choice by the designer was the one to include his brand name written in boxy Japanese characters on T-shirts, belts, suspenders and more. It added singularity to some of the more conventional pieces, while still keeping in line with the overarching theme.