The collection featured a capsule created in collaboration with Amazon, which promised 60-minute-delivery. 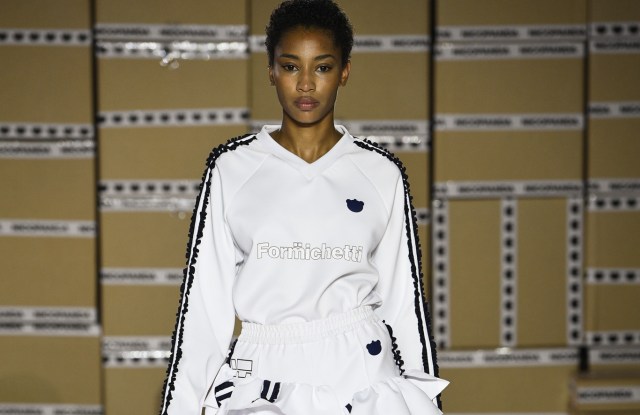 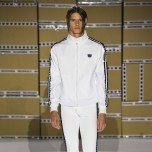 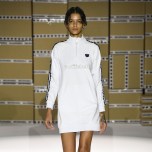 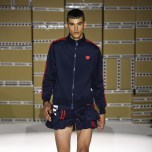 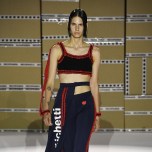 “One Hour Prime Now” delivery straight from the catwalk, anyone?

Nicopanda and Amazon elevated the see-now-buy-now concept to a new level on Saturday as parts of the label’s spring lineup were immediately up for delivery. If you lived within the right postal area in either London or Milan, the clothes were yours in 60 minutes. For the rest of the U.K., Italy, France, Spain and Germany, Amazon, which teamed with Nicopanda’s creative director Nicola Formichetti for a six-piece capsule, promised one-day shipment.

To fete the occasion, the unisex streetwear label moved its entire spring show from New York to Hoxton in East London, where the e-commerce giant has its European Fashion Photography Studio. If one believed the props — large Amazon boxes sealed with branded tape — the pieces, which included roomy hoodies, polka-dot leggings and a bomber, could have easily even been packed on site by models.

As for the main line, Formichetti was in a coming-of-age mood, taking cues from some of his favorite flicks, including “The Breakfast Club,” “Dazed and Confused” and “Jawbreaker.” Dubbed “The Jock, The Preps, The Punks — and The Prom Queen,” the collection featured oversized varsity knits, ruffled shirtdresses and pleated skirts, riffing off chaste schoolgirl uniforms but done up in rebel mesh or sensual satin.

The punk tribe, in one instance, opted for a bodysuit-polo hybrid and hold-up stockings, both of which were adorned with button badges and other hardware, while an ageless prom queen sported yards of pink tulle, layered over a pair of black wear-and-tear jeans.

Formichetti took care to maintain a tongue-in-cheek flair throughout, dressing his high school athletes in a not-so-subtle homage to the brand with the three stripes. Cue ruched black seams stitched against a white background and the hint of a panda silhouette in lieu of the trefoil on a series of tracksuits, tennis skirts and jackets.