Designers Levi Palmer and Matthew Harding worked their billowing shapes in inventive ways, to convey a new kind of strength. 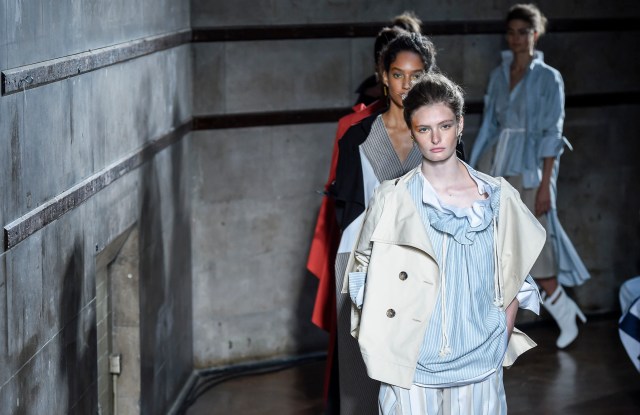 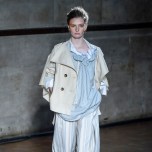 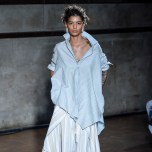 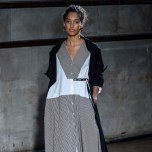 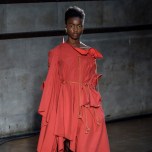 Design duo Levi Palmer and Matthew Harding had been musing on the idea of how memories are formed when designing their spring 2018 collection. That rather abstract starting point wasn’t immediately obvious, but resulted in a strong lineup of designs that looked effortless when worn on the runway, yet still had a complexity to them.

Shirts are the label’s signature, and this time they were cut into generous, voluminous shapes. One blue and white pinstripe number was paired with a cotton skirt in pale blue and beige candy stripes, with folds that draped around the body. Another standout design was in sky blue, with tiers of asymmetric ruffles that cascaded down one hip, worn with black harem pants.

But the duo showed they could rein in their shapes too, with looks such as a chic white, windowpane check shirt tucked into a navy knee-length skirt, which was cut with a gentle folds at the hips.

According to their show notes, Palmer and Harding wanted to propose a new form of power dressing “without the overtly masculine signifiers.” They succeeded in demonstrating that their soft, billowing shapes could telegraph strength, too.