The designer immersed himself in all things British, walking the line between rebel-chic and baby-doll cute. 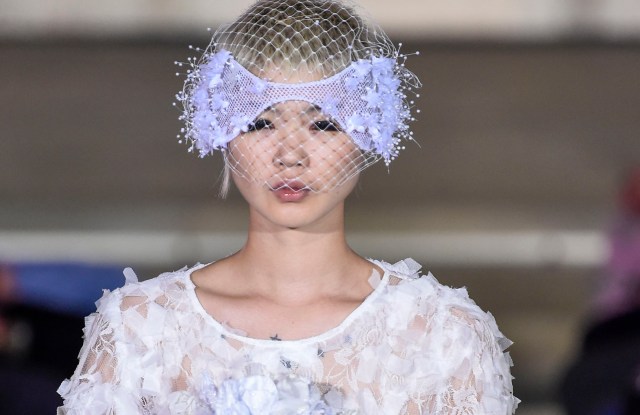 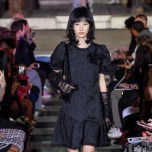 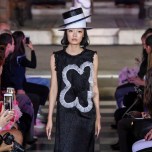 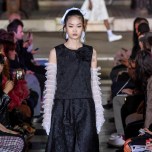 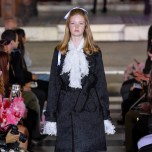 Best known for his loud use of color and overtly feminine aesthetic, Ryan Lo did well in turning it down a notch for spring. The designer immersed himself in all things British, with a special mention of the royal family – perhaps a nod to his newly acquired British citizenship and his desire to signal a more grown-up attitude. “I have moved on,” he kept stressing backstage after the show.

Funeral black and wedding white, with occasional glimpses of powder pink, dominated a lineup that was strong on texture. Lo developed a series of playful fabrics, including bouncy strips of tulle woven onto a cotton base, which looked fresh on both a dressy, long gown as well as a hooded anorak featuring a large pussy bow that Lo said he borrowed from Lady Di.

Little black and little white dresses done up with puffy sleeves in shimmering jacquards telegraphed baby-doll cute, but as Lo matched them with feisty Doc Martens and quirky top hats designed by his buddy Stephen Jones, the visual instantly switched to rebel-chic.

Meanwhile, with thick strings of pearls meandering up their waists and across their bodies in lieu of the more conventional regalia, Lo’s princesses heralded a boastful change of guard in the royal palace. Would the Queen approve? There is a good chance. Her beloved Launer handbags were part of the show, though when Lo was done with them, they just looked street.