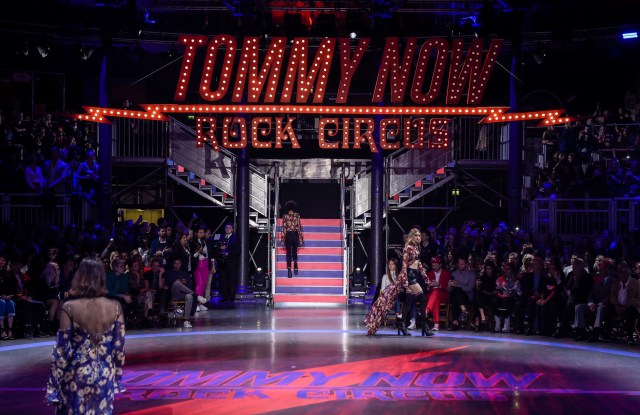 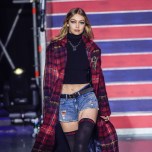 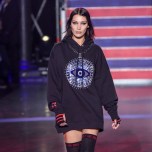 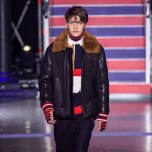 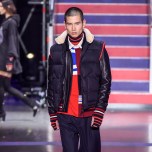 Tommy Hilfiger rekindled a longstanding love affair with London this week, taking his peripatetic TommyNow runway show to the Roundhouse in Chalk Farm for a rock circus starring Gigi Hadid, a clutch of spinning acrobats and the American pop duo The Chainsmokers.

Like P.T. Barnum himself, Hilfiger had a host of sideshows up his sleeve, too. On the periphery of the circular show space, guests grazed on mini cheeseburgers, hot dogs, chips and wine; they perused merch from pop-up shops selling Tommy Hilfiger vintage, Tommy x Gigi, and Gigi collections; and got T-shirts, bags and buttons customized. A poster-making booth offered guests the chance to pose alongside pictures of Hadid.

Later, when the red and white lights went down, the Nineties hip-hop cranked up and the show rolled on with models stalking the runway in thigh-high black ribbed tights, cutoff denim, leather shorts and Nineties streetwear — lumberjack shirts, leather coats with shearling collars, supersized hoodies, plaid coats and trousers — and big fat puffers.

Hilfiger described the new collection as “rock-sport-street infused with military and workwear. If you think about that it’s really the street style of today, but it’s inspired by all of those different elements.” There was plenty of sparkle in the mix, too: denim jackets winked with chunky crystals, while sequins flashed from T-shirts and fuzzy knits.

The music-loving designer — who admitted that his concert T-shirt collection stretches to more than 1,000 pieces — said London was the clear choice for his first TommyNow see-now-buy-now show outside the U.S. He pulled a very London crowd into his front row including Rafferty Law, Sadie Frost, Sir Philip Green, Pixie Geldof, Yasmin and Amber Le Bon and Daisy Lowe.

“I came here in the Seventies and I was so inspired by the music-fashion fusion,” Hilfiger said as he stood under the giant marquee spelling TommyNow Rock Circus. “In September 1970 I was on the Kings Road, looking at people who were wearing bell-bottoms and platform shoes and fringe and all sorts of cool prints, and that has stayed with me, that image in my mind, it has stayed with me forever. I was inspired by that, and I wanted to really bring it back home to where I was first inspired.”

Hilfiger said the idea for the show came from the Rolling Stones and the Beatles rock ’n’ roll circuses, and the desire to fuse fashion and music in a theatrical way.

The venue, which has hosted music acts ranging from The Rolling Stones, Led Zeppelin and Jimi Hendrix to George Michael and the London Contemporary Orchestra, was ideal — not too big or too small. He had wanted seats for guests and fashion editors but also for the public. Tickets for the latter sold out instantly on the brand’s web site.

Backstage before the show, Hadid said she was becoming an old hand at the TommyNow extravaganzas, and was looking forward to the London one — her third — because she’s wiser to the act.

“The first show I completely blacked out, I was so nervous, and it goes so quickly you don’t realize. The second season I really tried to look around and take it in and be more in the moment, and not let my nerves hinder my experience. And I just tried to keep learning from that, and this year I’m a lot less nervous and I’m confident in the collection so I’m really excited,” said Hadid who was dressed in a heavy leather tour jacket with her name emblazoned on the back in red – and flashes of leopard print on the front.

“It’s the new tour jacket,” said the gregarious Hadid. “We got an old jacket from the archives and I wanted this weight. All of the jackets will come looking like this — old and heavy and cool.”

Hilfiger said Hadid — who walked in the show along with her sister Bella and brother Anwar — continues to be hands-on with the collection. “She actually shaped and molded the entire collection. She was a fit model the first time around — and then she decided it’s easier to pin and adjust on someone else.”