New Topshop chief executive Paul Price said he expected the shearling coat worn by Adwoa Aboah to open the show would be among the sellout items. 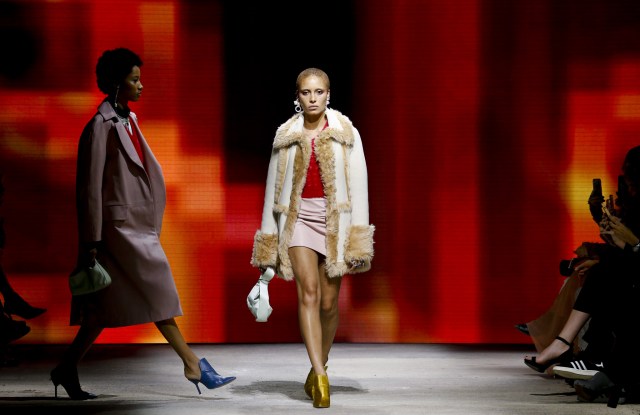 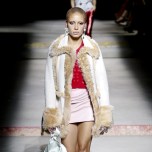 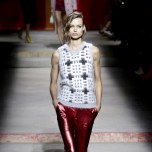 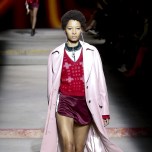 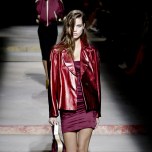 The Topshop Unique girl for fall is a glamorous creature. The show notes spoke of a time before Instagram and the threat that every nocturnal indiscretion might be documented on social media; of wild nights spent at underground stalwart, now-closed Soho nightspots like Madame Jojo’s and Soho Revue Bar, the kind of places “that caught the attention of photographer Corinne Day.”

You could almost see the influence of Kate Moss, who was one of Day’s great pals, in the glitzy, thrown-together appeal of the see-now-buy-now collection, like a rummage through vintage market stalls that turned up shearling coats, sequined little tops, tiny leather mini skirts and glamorous other-era coats.

Hints of the Fifties were seen in demure cocoon coats in shades of vanilla or coral, and in the peaked sunglasses in bright pop colors. And sheer blouses in ice cream shades, some dotted with crystals, had a subversive Sixties vibe.

There was some sharp tailoring that echoed Seventies silhouettes, especially nice in a warm butter yellow pantsuit and palest lilac separates, and long leather coats were cool in low-key bittersweet chocolate, or shimmering silver foil for a bigger statement.

Little party dresses in satin had corsetry panels and hook-and-eye details, but the feather-trimmed, sequined showgirl dresses packed a bigger punch, especially the dolly pink one that came with a wafting marabou-trimmed cape.

New Topshop chief executive officer Paul Price said he expected the shearling coat worn by Adwoa Aboah to open the show would be among the sellout items, and added that the graffiti Ts the models wore for the finale, all sporting their names (“Joan,” “Jourdan” etc), were also expected to be popular at the brand’s Oxford Street flagship, where customers will be able to have them customized with their names by in-store graffiti artists until Friday.