For his spring collection, Alessandro Michele showed — we're not sure. We couldn't see it through the low-light fog and flashing lights. It was probably cool. 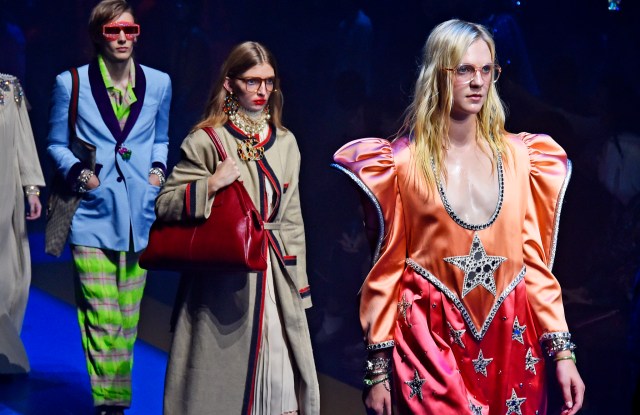 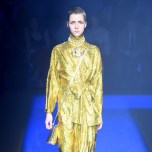 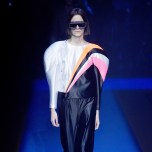 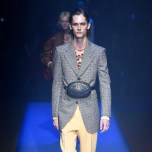 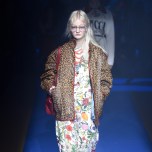 The impeccably curated tableau vivant of artful, ironic juxtaposition features a too-tall putti-painted architectural panel turned on its side against romantic floral wallpaper. In front of the panel, a tapestry-covered settee awaits Alessandro Michele. He arrives with the aura of a rock-‘n’-roll aesthete: Seventies haircut and beard working in concert with his Gucci street-glam regalia: aviator shades; gorgeous bejeweled, sequined baseball jacket over jeans, the hem of one leg turned up just a casual smidgen; dragons on his boots.

The occasion — an “intimate” press conference (12 journalists) that replaced Michele’s usual backstage walk-throughs, and through which he waxed fashion-deep and philosophic. On the industry’s mind-set: “[Fashion is] the only language that wanted to keep the old codes…that doesn’t work anymore for me.” On his creative evolution: “Now it’s more than beauty, it’s more about a state of mind…an idea of community.” On continuing his now-signature Gucci aesthetic: “I want to go deep…[with] this little swimming pool, and make the swimming pool like an ocean.”

To those who buy into deep fashion thoughts — one assumes, everyone in the room — it made for often provocative discourse. For those who don’t — had Christopher Guest filmed the session for a make-fun-of-fashion-movie, he could insert it as is. (It recalled Joe Zee’s brilliant one-line review of “The Devil Wears Prada,” spoken privately, so here’s hoping he’s not mad: “I worked for Polly Mellen. Where’s the satire?”)

About the clothes, Michele offered: They “help me to tell the story, with the faces, the stage and everything…the clothes are the bridge that help you explain the idea.” Translation: The clothes are no more important than any other element of the show.

We get it — the story, the Instagram moment, etc. But for a designer to say the clothes are merely one storytelling element among many rather than central to the message is an affront to his craft, to generations of great designers (and aspirants) past and present who care deeply about the clothes, and to the customers breaking out the plastic for Gucci’s four- and five-figure sartorial whimsies.

To his credit, Michele is a man of his word. Apparently the clothes didn’t matter much to him this time out, because he didn’t care if we saw them through his impossibly low-light fog and excruciating flashing lights — as long as the pictures worked. (They did.) He gets high marks for the set — a statuary spectacular inspired by an 18th-century monk’s writings about Horace’s ancient villas and how the past can inform modernity, or something like that. (Then again, Dante dubbed Horace “Orazio Satiro,” so perhaps Michele’s reference was twofold.) Racing by the various sculptures in the interior dusk, the clothes offered the promise of two adjectives in short supply so far this season — interesting and bold. But I’m not sure. And since I’m not in the habit of reviewing clothes on which I couldn’t concentrate or see well, or of reviewing from pictures — or from descriptions e-mailed out postshow (might they have been cobbled together hastily in response to complaints?) — I won’t start here.