The designer celebrated his homeland, Sicily, with a beautiful collection infused with a flamboyant, fearless elegance. 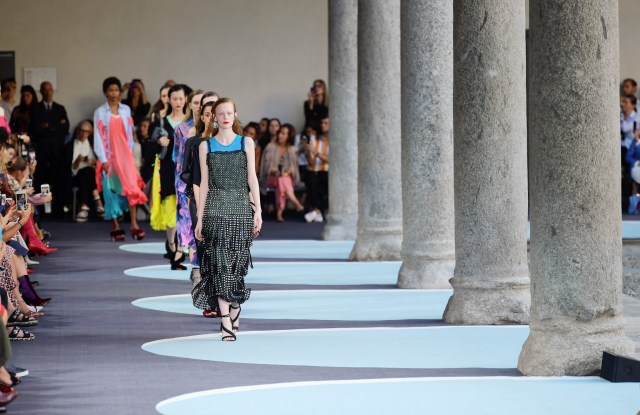 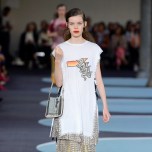 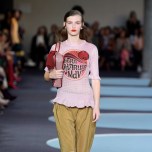 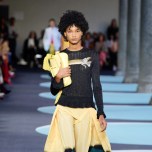 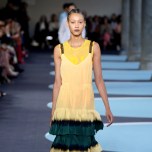 For spring 2018, Marco de Vincenzo indulged in rainbow colors, fluid silhouettes and sparkling effects, mixing and matching pieces with a seemingly carefree attitude. Inspired by the free-spirited summers of his Sicilian childhood, he paid homage to his native island in a personal way. So forget Sicilian carts, cassata sweets and ruby oranges; instead de Vincenzo elaborated memories that he subtly introduced in the collection. For example, the posters of classic movies aired at local cinemas during the summer were embroidered on tiny bags, while a Lurex-fitted sweater and a maxi T-shirt trimmed with crystals were decorated with an embroidery of three heads featuring three legs each, which is actually the heraldic sign of Trinacria, Sicily’s ancient name. “Ultrapharum” and “Triskelion” were also the island’s additional names, which the designer used to embellish tank tops and a sweet knitted ruffled T-shirt paired with a flowing pleated skirt splashed in a degrade graphic pattern echoing psychedelic optic illusions. A breezy feel was imbued in a silk blouse with a soft bow at the collar, which was matched with a coordinated skirt and maxi cotton cardigan, all worked in bubblegum pink.

De Vincenzo also introduced his signature degrade geometric motifs via Lurex knits, worn with glittery high-cuffed flared pants, and with his allover fringed tops, skirts and dresses, which had a playful yet sexy kick. From the delicate butterfly applications on the cropped tops shown with ruffled pants to the floral embroideries embellishing the hems of maxidresses, featuring different chiffon panels knotted together, each piece displayed high-end craftsmanship. Matched with the designer’s unique fantasy and color sensibility, it contributed to the collection’s flamboyant beauty.