Bikers. Ballerinas. My Little Pony. Gigi Hadid as a human bouquet. Moschino was full of characters. 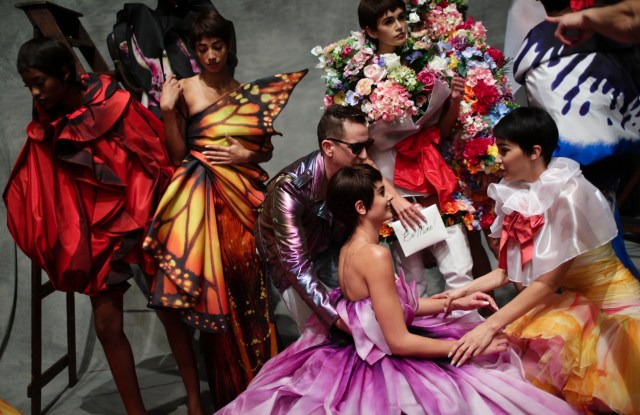 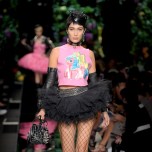 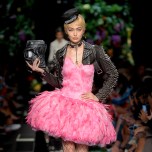 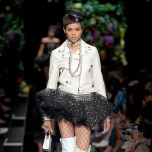 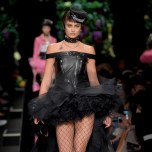 Where to begin with Jeremy Scott’s spring Moschino show: “the story of Kaia Gerber’s life,” as he called the show’s first act; or the finale, Gigi Hadid as a literal bouquet of flowers? The latter was a little more fun so let’s start there. There is perhaps no more unoriginal design concept than florals for spring, so Scott embraced the obvious and went berserk with it. The finale was abloom with grand gowns shaped like orchids, tiger lilies, a monarch butterfly, an upside-down bouquet of long-stem roses, a blob of purple feathers sprung with butterflies that actually brought to mind a Philip Treacy for Alexander McQueen hat, and, finally, Hadid wrapped in a sheath of white silk, her head engulfed by a massive collar of buds and her waist tied with a red bow. Cheap thrills? Yes, of course. Just like the $5 bouquets of deli flowers, which Scott seemed to have in mind, it was a tacky good time.

Back to Gerber: the teen opened the show’s company of biker ballerinas in a black leather moto jacket, blue feathered tutu, My Little Pony T-shirt — part of Moschino’s latest pop collaboration capsule, available immediately — fishnets and butch boots. Scott saw her as a metaphor for the look , “she’s that little girl who loved My Little Pony and the ballet but she’s becoming tougher, more mature,” he said. To digress slightly, does anyone else think Gerber has been rushed to the runway? At just three weeks past her 16th birthday, she’s still so childlike, Kendall Jenner could be her mother.

Anyway, Scott did his standard feel-good dance, this time using bikers, ballerinas, a dash of “Black Swan” and Ballet Russe, a whole lot of Moschino branding, plus some human bouquets. Bravo! He took his bow in his My Little Pony T. Friendship — and merch — is magic.