Miuccia Prada's collection with its message of feminine strength felt ponderous and, at times, pedantic. 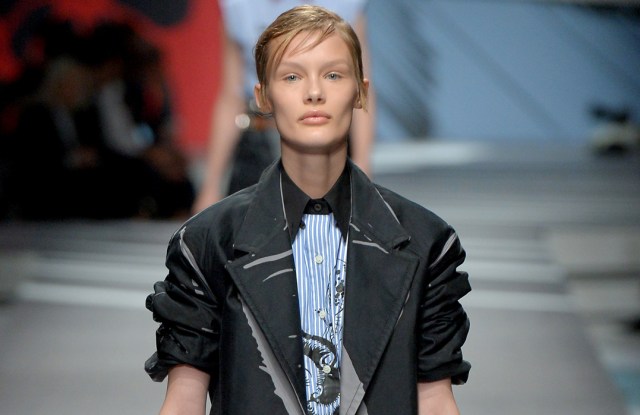 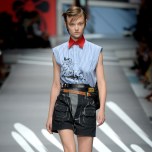 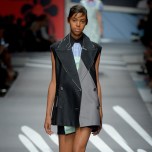 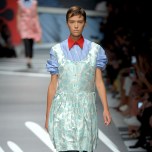 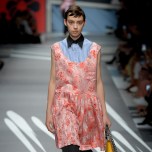 This is a particularly political moment for fashion, on two levels. Outward-facing, the industry continues to reflect upon and react to the realities of the Trump era and its global ramifications. Looking inward, fashion considers its interface with major ideological issues — diversity, gender fluidity, cultural appropriation, body image.

Miuccia Prada, a politically literate, ardent feminist, has at times used her runway as a platform to express not only her seasonal sartorial preferences but her world views, particularly as they pertain to perceptions of women. Prada is also an art lover and patron. In the collection she showed Thursday evening, she drew on those elements — feminism, politics, art — for a collection of statement clothes, not in the manner of trend statement or take-your-breath-away statement. Rather, they stated a philosophical call to arms. The result was fascinating in its premise yet oddly disquieting in its ultimate dispassion.

Given the standing of women in the world today, “I feel we really should start being combative,” Prada said backstage post-show. “I am kind of encouraging strength.” She did so while highlighting the work of several women artists — cartoonists — working from the Forties through today. She chose cartoonists because their genre has long provided a sharp world view, presenting women “in a very real way — good to the bad, the beautiful girl to not that beautiful,” she said, explaining that such considerations triggered in her the desire to approach this collection “in a militant [way], a very proactive way. So I would, through my clothes, of course, suggest energy, struggle, work, ideas.” Cartoons, she reasoned, can tackle tough subjects “in a light way, [so] you can suggest so much more than if you are serious.”

Yet the collection didn’t feel light. Rather, it felt ponderous and, in a way, pedantic. One sensed the strain of message in a lineup that checked all the au courant boxes: strength, street, gender fluidity, youth (these days, luxury is showing its love for Millennials every which way but on the price tag). Naturally, there were strong clothes. Prada is a brilliant designer with a thought in her head, a creator incapable of bland. Here, she played with and crossed gender stereotypes — pretty dresses and bustiers, girly to the point of, well, cartoonish, worn over mannish shirts and pants. And she went mad for coats, impeccable beauties with a dash of Yohji to the tailoring. Many — though thankfully not all — of these featured the jarring artwork of Prada’s cartoonist collaborators, sometimes gussied up with jeweled panels or studs.

Interesting — yes. But the basic idea — ironic juxtapositions of cartoons against exquisite tailoring — could have been made more succinctly. After a while endless cartoon drawings converge into a blur of exaggerated facial expressions. In the end, the bifurcated message resonated uncharacteristically, as neither the fashion nor the social message was delivered with the passionate power that Prada has trained us to expect.