Twenty years after her brother Gianni Versace’s death, Donatella staged a moving show in his honor on Friday evening. 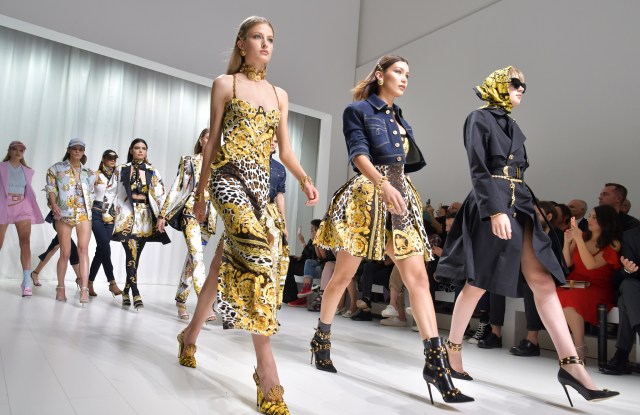 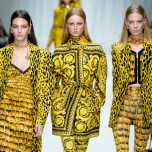 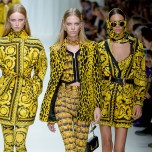 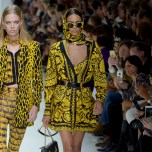 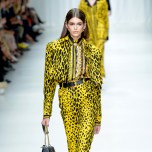 There’s a way to squelch rumors: Address them — confirm, deny or state whatever truth lies somewhere in the middle.

Donatella Versace has chosen not to do that, which is her right. And so the speculation persists.

Twenty years after her brother Gianni Versace’s death, Donatella staged a moving show in his honor on Friday evening. “I finally have the courage to go to the archives and give my tribute to Gianni,” she said at an informal press conference before the show at the Triennale Museum. Might the concept also be read as a possible punctuation mark of a different sort: Donatella’s swan song from the ready-to-wear runway? Quite possibly. And that provocative point couldn’t have been lost on her. Donatella’s silence keeps us wondering if she plans to continue in her current creative role or bring on new talent in some capacity,  with the latest talks centered on Kim Jones, Louis Vuitton’s men’s designer.

Either way, she negotiated the moment to perfection, the event brimming with emotion without turning elegiac. “The show is upbeat,” Versace repeated several times to a small assembly of journalists pre-show. And so it was, a celebration of one of 20th–century fashion’s great creators.

It resonated with the audacious style and fine craftsmanship on which Gianni Versace rose to fame. And the showmanship. In what was clearly the biggest social media moment of the week so far, Donatella closed with a pantheon of golden mesh-clad supermodels from the generation that defined the term — Cindy Crawford (yes, her daughter Kaia walked, too), Naomi Campbell, Carla Bruni, Helena Christensen and Claudia Schiffer — and who reigned on Gianni’s runway. “It’s the same competition,” Donatella quipped of the women. “They all want to be center…I mean, it can’t be five people doing the center.” That essential center chez Versace? Naomi, of course.

In today’s anything-goes world, it’s hard to imagine the impact of Versace’s iconoclastic vision 20 years ago, let alone through his ascent over the previous 20. His audacity shocked with delight. Gianni’s deliberate elevation of sex and brashness to high fashion status — flash and dazzle wrapped in rock ‘n’ roll attitude — depended upon his integration of casual elements (motorcycle jackets, leggings) with traditional trappings of glamour. In that sense, he infused luxury with a street vibe before it was “a thing.”

In developing this collection, Donatella homed in on a single overarching motif — the prints that her brother made signature to the house. She extracted from the archives, among others, “Baroque,” “Vogue,” “My Friend Elton,” “Warhol,” and one that might play as controversial today despite its obviously celebratory context, “Native Americans.”

With nothing discreet in that litany, Donatella went to town, often showing the patterns neck-to-toe — Warhol minidress with matching over-the-knee boots and handbag, and any number of looks finished with printed leggings — a huge hit with the current model set, Versace noted. Yet though highly focused, the collection reflected Gianni’s range, from biker babe to power woman sophisticate. And yes, he loved a high-waisted jean; Donatella’s takes looked good enough to launch a retail revival.

That particular retro cut and strong shoulders aside, Versace stressed that the clothes were not replicas: Today’s tailoring is more relaxed and freeing than that which Gianni Versace perfected back when. As for the look, the mood, the bravado, they transported beautifully to today. And in a mostly quiet season, they delivered a key message. “Gianni,” Donatella said, “had the courage to dare.”