Gosha Ashkenazi staged her show in the cloisters of the church of Santa Maria della Grazie, home of da Vinci's "The Last Supper." 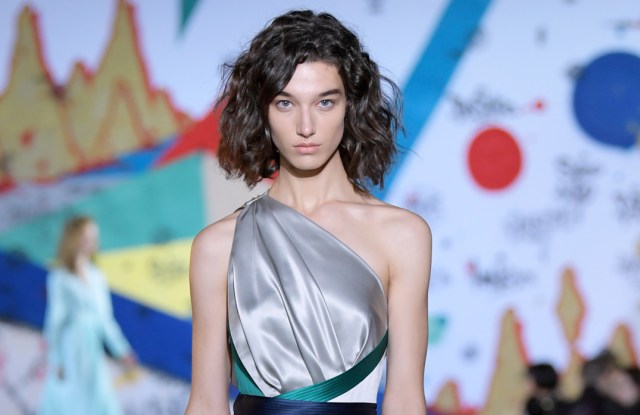 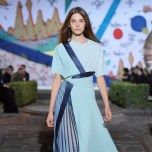 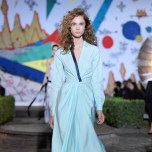 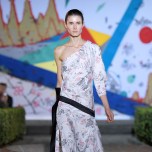 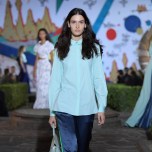 Before a stitch of clothing was seen on the runway, Vionnet’s spring show was a coup for Goga Ashkenazi. She managed to secure as a venue Milan’s church of Santa Maria delle Grazie, where, behind a wall in the cloisters where the show was held, sits one of the most famous works of art in the history of man: “The Last Supper” by Leonardo da Vinci. A private tour of the painting was offered for guests after the show. That Ashkenazi was able to convince the head priest to lend her such a hallowed space for a fashion show — the first ever to take place there — is a testament to her chutzpah, which is the force driving the oil and gas executive to resuscitate the house of Vionnet.

Her spring collection was proof that she’s come a long way on the steep fashion learning curve since taking over the house. Despite the show venue, da Vinci codes in the collection were tenuous. “For me, Madeleine Vionnet was timeless and da Vinci was timeless,” Ashkenazi said backstage. Rather, the lineup was born mostly from an obsession with Bushido, Japanese samurai culture, which lent itself nicely to Vionnet’s signature draping. Long, languid gowns in cool colors — aqua, navy, white and silver — were gently draped and trimmed with a Japanese affectation. Some were trimmed with black chrysanthemum appliqué or laced with cording, but the simpler, the better. Wrapped tops fell off the shoulder and were worn over easy track pants. In an effort to keep up with the casual world in which we live, Ashkenazi worked in a lot of poplin on shirting and gowns. She showed silk robes over denim and shorts and made a jersey tuxedo into a tracksuit. Still, the gowns — if not the looming presence of da Vinci — were the star of the show.