Brandon Maxwell is feeling joyful. It showed on his runway. 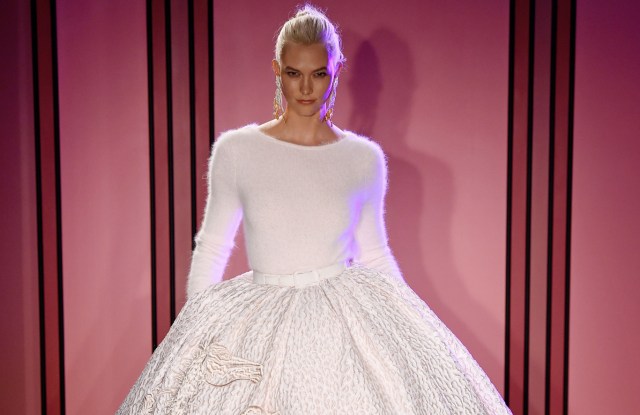 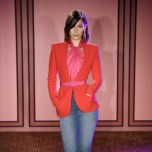 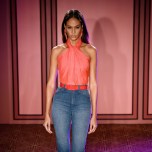 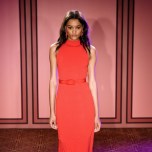 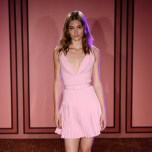 Sometimes your aesthetic biases get unsettled. Like when you walk into an already over-the-top venue — oh, let’s say the uptown-decadent Doubles Club at the Sherry Netherland Hotel, in all its pink-walled, low-light glory — and spot a giant Toni the Tiger head, crafted by florist Nicolas Cogrel from densely packed, wildly indiscreet pink flowers. The immediate glee thus triggered kind of makes you rethink the all-white, one-flower-only fashion standard. What’s wrong with the occasional overt expression?

As Brandon Maxwell sees it, nothing at all. “To be very literal, my life has felt very colorful in the last six months,” he said backstage, the degree of emotion disarming. “I have been in such a great mental place. I just really enjoyed this creation process. It was such a joyous experience for me.”

That joy came across bright and clear on Maxwell’s runway. So, too, did his determination to include more looks of the daytime persuasion. In the beginning (a not too distant beginning; he launched his business two years ago), he struggled with how to translate his work for day. But, this season, “it just happened.” Not that he’s going after the yoga-pants set. The collection drew from his childhood in Texas, hence the emphasis on denim. (His jeans pocket features an outline of his father’s Skoal tin.) Maxwell’s ladies wear it their way, which is to say, sexy, as announced by Gigi Hadid in the first look out: with strong-shouldered pink jacket and red halter. Other variations: with peplumed bustier and a white shirt with cutaway tails.

Maxwell also showed chic dresses in vibrant hues — red, pink, yellow, blue — all body-con yet cut with appealing fluidity. So, too his eveningwear. It retained every bit of the glam on which he so swiftly built his reputation, but now with ever more color. Maxwell favors linear silhouettes, the ease delivered in both languid lines (belted royal blue gown with trumpet sleeves) and grand flourish (hot pink long-sleeved column with dramatic fly-away train). At times, he employed precision pin-tucking and pleating, which infused the glamorama with a graphic modernist touch. When he reverted to his signature palette, he preferred white over black, rendering it in versions from bustier-over-trousers to plunging-V goddess gown to a dance with silhouette rare to his prior runway repertoire: the ballgown. Karlie Kloss closed the show in a sportif take on the genre, an angora sweater over huge skirt embroidered with a graceful horse designed by Maxwell’s friend and fellow Texan, Jules Buck Jones. Rendered tone-on-tone, it made for an aura of chic fancy. As a flamboyant pink tigress might say, “Grrrrrreat!”