The designer showed a lot more dresses than in the past. 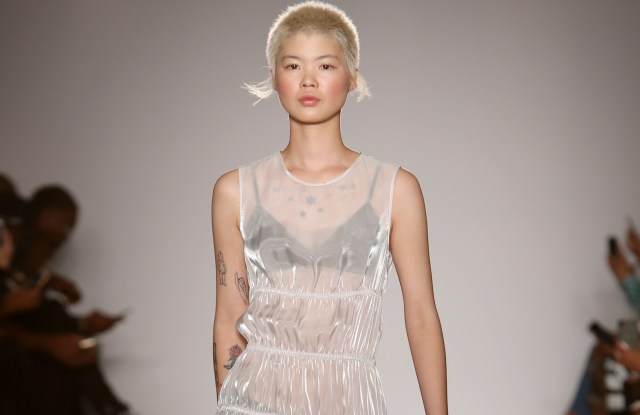 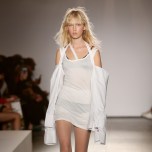 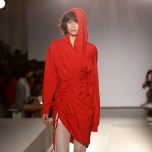 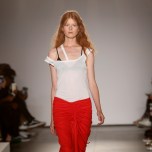 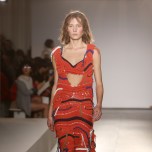 Calvin Luo may be young, but his work shows a sophistication beyond his years.

The recent Parsons School of Design graduate was the youngest designer to present in the official New York Fashion Week calendar when he unveiled his collection three seasons ago; for his fourth outing, Luo continued to refine what had created buzz in the past.

Before the official runway show began, Luo presented male and female models in super lightweight pajamalike outfits made from a temperature-sensing heating fabric Luo created that changes color when heated.

But the real draw was his distinct take on what he described as a “skater-girl-turned-whimsy-woman.” The story started with some sporty references such as hoodies, tanks, cropped tops and skirts with drawstring details and finished with elaborate knit dresses and a strapless blue metallic evening gown.

The line continued to showcase his propensity for deconstruction, especially as it applied to sleeves.

Although his past collections have explored more gender-fluid looks, this season showed more delineation between the sexes, at least as far as the women’s looks were concerned.

Dresses were flirty and feminine with ruching and ruffles and tulle insets on pencil skirts. But the guys’ looks were more “asexual,” Luo said, such as tan shorts with smocking at the knee and a white fishnet long tunic under a gold jacket with appliquéd ruffles.

This collection was successful in showing Luo’s maturity as a designer and highlighting his continuing promise.